Not Snow But Toxic Foam Covers River Yamuna In Delhi 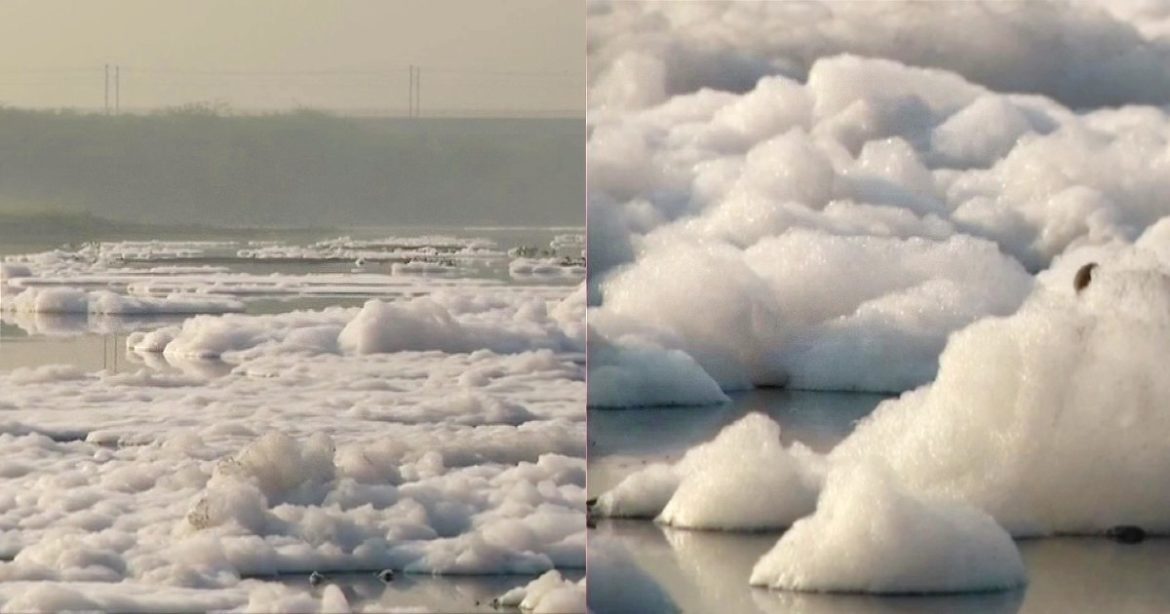 The Yamuna river in Delhi has worn a blanket of something that might look like snow from a distance. But shockingly, it is not snow. It is highly toxic, thick and white foam frothing out of the water body. The foam has surfaced as a result of the dumping of industrial and residential wastes that release pollutants. Delhi Jal Board has claimed that untreated sewage from Uttar Pradesh and Haryana have entered the river increasing its ammonia levels. Read on to know more.

Thick, white, toxic fumes developed from untreated sewage and harmful chemicals have covered the Yamuna river near Delhi’s ITO. This has been a result of a lack of functional sewer system and wastewater management in the unauthorised colonies. The untreated sewage reaches the Yamuna river from Haryana through Najafgarh drain and from UP through Hindon cut canal, as per reports. The phosphatic compounds settling down in the river beds lead to frothing. Additionally, phosphates are also released due to the decomposition of water hyacinths.  Pollution levels in the Yamuna river had dropped due to the complete halt in industrial activities during the nationwide lockdown, but now the situation has deteriorated again. On February 23, 2021, ANI has shared alarming pictures of the river on Twitter.

Delhi: Toxic foam was seen floating on the surface of the river Yamuna at ITO today pic.twitter.com/oIp172TDxv

Also Read: Taj Mahal’s Foundation Is Under Threat Due To Receding Water Levels Of Yamuna River

CPCB Had Issued Guidelines On Idol Immersion In The River

The Central Pollution Control Board 2010 had issued guidelines on idol immersion, prohibiting immersion of idols that are non-biodegradable. Bans had been put on immersion of idols made with Plaster of Paris. The authorities had also urged that the idols should be painted with only eco-friendly colours. But people clearly always do not follow these guidelines.

No divine dipDevotees immerse an idol of Lord Ganesha in the polluted Yamuna river covered with froth on the last day of Ganesh Chaturthi festival, in New Delhi, on Sunday.PTI ….This is shocking… pic.twitter.com/6DPUo56ap0

The condition of the river had worsened in September 2018 after the immersion of Plaster of Paris Idols. The Plaster of Paris idols immersed in the river contain toxic chemicals like lead, carbon, cadmium and mercury. In November 2019, devotees could witness more froth and less water in the river during the Chhath Puja.

Hindu women worship the sun god in the polluted waters of the river Yamuna during the religious festival of Chhath Puja in New Delhi, India. More photos of the week: https://t.co/W4Yt83anoh 📷 Adnan Abidi pic.twitter.com/yJATI4ZQLe

Also Read: Yamuna Floodplains To Get A Makeover With Water Bodies & Walking Track

A month ago, the Delhi government had prepared a nine-point action plan to control the Yamuna river frothing due to hazardous wastes. Let us all do the little that we can to keep the holy river clean and pollution-free. Meanwhile, have you seen this cutting-edge smog tower in Delhi?