Let’s just say that 2020 has been an exceptionally bizarre year, filled with some really weird incidents. From a monkey stealing Covid-19 samples, to the Pentagon releasing UFO videos, this year is just getting crazier! And now, a woman in Ukraine casually opened the Emergency Exit to take a walk on the aircraft wing. Why? Well she was simply feeling ‘too hot’! Read on to know more about this oddball incident:

Woman takes a walk on airplane wing for getting some air!

The woman in picture boarded the Boeing 737-86N in Turkey with her two children, according to a report by The Sun. As the plane landed in Kiev, she opened the Emergency Exit, and stepped out to take a walk on the airplane’s wing. When questioned about this weird incident, the mother-of-two said that she just wanted “to get some air” because it was “too hot” inside the aircraft! According to reports, her kids were surprised too, and were saying, “That’s our mum!” 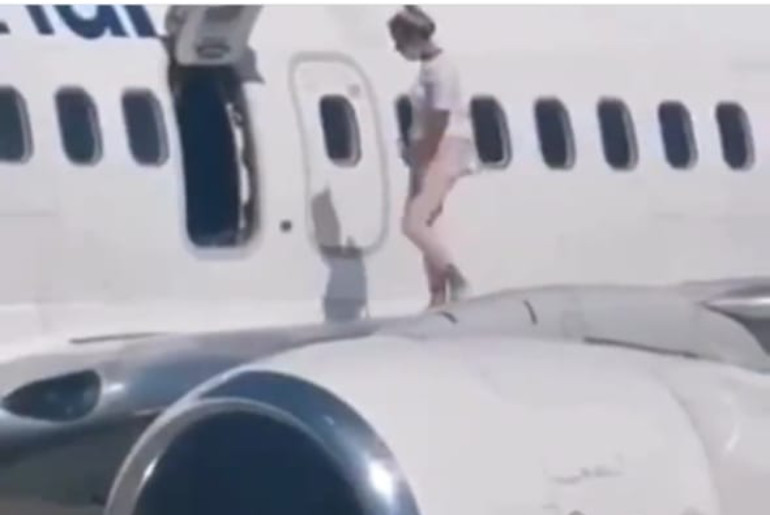 When the pilot came to know about this, he summoned an ambulance, police and border guards. She stepped back inside. She also tested negative for drugs and alcohol. Anyway, Ukraine International Airlines (UIA) said that it has blacklisted the passenger, for “gross violation of aviation safety rules and behaviour on board.” She was also criticised for such unruly behaviour, and setting a bad “parental example.” Apparently, UIA has also asked that the woman be fined “an exceptionally high financial penalty”. A video of the woman taking a walk on the airplane’s wing went viral on social media:

Well, looks like this might be have been her most expensive flight! Speaking of flights, don’t forget to check out the rules issued by airlines before flying. Also, guys, don’t do anything that’s untoward or risky. As it is, flights are one of the safest modes to travel for now, so let’s keep it that way!