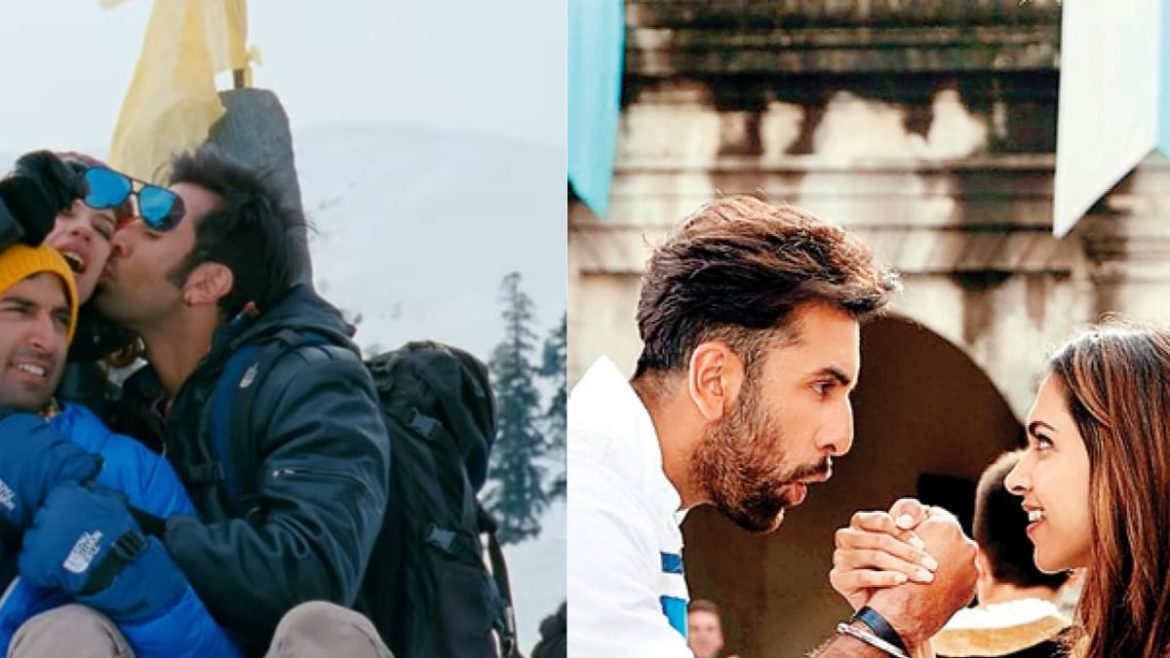 Ranbir Kapoor is a fabulous actor and there is no doubt about it. The actor highly believes in quality over quantity. Apart from his good looks and great acting skills, every movie has a thing in common — travel. Yes, the youth icon promotes travelling extensively. Be it through his reel or real life. However, this can be a coincidence but with no denying, Ranbir Kapoor’s films do encourage us to travel worldwide.

So, on his birthday, let’s look at some of his travel-inspired movies that made us wanderlust.

A movie about self-discovery, Tamasha, released in 2015, made us fall in love with the French island of Corsica. The most important part of the movie — the introduction of Ved (Ranbir Kapoor) and Tara (Deepika Padukone) was filmed here. The film featured a gorgeous sunset sequence of Ved and Tara roaming the streets of the beautiful city.

Imtiaz Ali shot”Matargashti” at the Bastia Museum Café. Later some sequences take viewers across Kolkata, Shimla, and Delhi too.

Also read: 5 Bollywood Movies That Will Transport You To The Historic Lanes Of Kolkata

From heartwarming music and brilliant plot to stunning locations, this movie is the complete package. From the beautiful city centre of Prague to the calming Dal Lake of Kashmir, to the popular Nizamuddin Dargah, this Ranbir Kapoor film features beautiful places that are instantly etched in our minds.

The much-loved songs like Katiya Karun and Phir Se Ud Chala were shot in the snow-capped mountains of Kashmir. Filming took place in Betab Valley, Kulgam, Kupwara, Pahalgam, and Srinagar.

YJHD remains one of the best Ranbir Kapoor films for travel inspo. Also, Ranbir Kapoor plays the role of a travel cinematographer. So, the film covered various exotic locations.

The movie begins with a fun trek in Manali. Bollywood movies can travel to Hadimba temple and Pahalgam, Jammu thanks to this movie.

The first song after the interval, Ilahi, mesmerised globetrotters. This song was shot in Paris and Lyon belle brings together a comprehensive travel montage of food, streets, culture, and all the beauties of cities in France. The end of the movie takes viewers to India’s beloved wedding destination Udaipur.

Ranbir Kapoor’s latest film Brahmastra was shot at many picturesque locations across India and the world. Director Ayan Mukerji filmed the viral romantic ballad Kesariya in Varanasi’s famous ghats and colourful narrow streets. Later the Brahmastra crew travelled to Manali to capture the lush forests, mountains, rivers, and lakes of this sacred site.

One of the most cherished films of Ranbir Kapoor, Ajab Prem Ki Gajab Kahani’s filming locations are among the most beautiful. This is because they add aesthetic value to the film’s visuals. The most picturesque song Tu Jaane Na was filmed at Pamukkale, Denizli (a town in Turkey), and Aspendos Theater. The proposal and shooting sequence takes you through South India’s favourite hill station, Ooty.

Well, our list proves Ranbir Kapoor is Bollywood’s perfect travel ambassador. So, which of these Ranbir Kapoor film locations are you going to visit soon? Let us know in the comments below.