The lockdown has led to several species of animals making a reappearance in cities and public spaces after decades. The latest in the list is a pair of whistling dogs, also known as Dhole, who have been spotted in Gujarat’s Vansda National Park for the first time in 50 years. 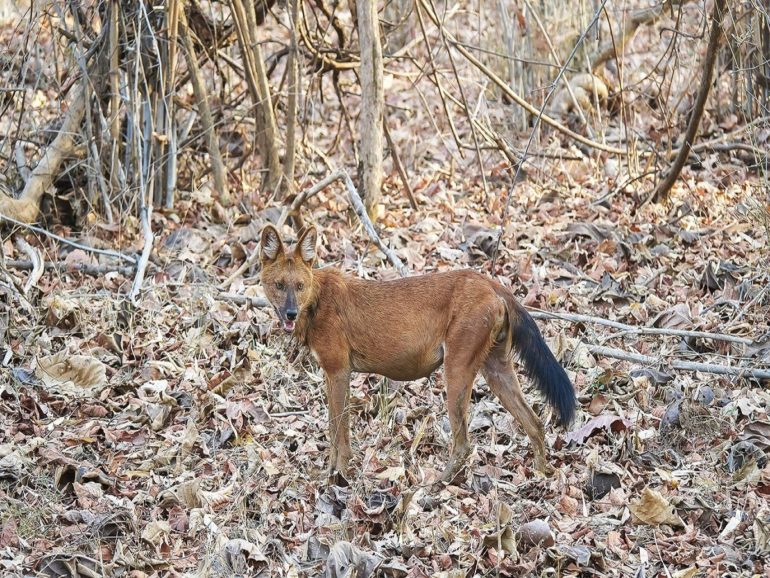 According to media reports, these rare Asiatic wild dogs were last spotted in the 1970s by Late Maharaja Digveerandrasinhji of Dang. And now, after nearly 5 decades, two dholes have been caught on camera in the Vansda National Park, which is spread over 24 sq km in the hilly terrain of the Sahyadri ranges. Dhole is called the whistling dog due to its peculiar contact call.

As per TOI, the dhole was first spotted in the park by a local birder on February 20. He then immediately reported the sighting to the forest department.

However, Dinesh Rabari, Deputy Conservator of Forest, South Dangs division, told TOI, that he and his team had already suspected the presence of dholes in the forest. It was only after they spotted a disemboweled carcass of a deer, their suspicions were strengthened. The department then set up some camera traps to observe their activities. And the very next day, the first image of dhole was captured in the Kevdi region of the park.

After confirming the presence of two dholes, the department has now set up a range of camera traps to monitor their movement, behavior, food and foraging habits.

Dhole Is An Endangered Species As Per The IUCN

Dholes are native to Central, South, East Asia and Southeast Asia. In India, they are found south of the river Ganges, in the Western and Eastern Ghats and in the north-eastern states.

Dholes are known for disemboweling their prey within minutes. A pack of these dogs is even capable of killing a tiger. That’s how ferocious they are. However, the presence of these dogs in the forest is a good indicator of the quality of a forest. It also shows that the forest is abundant with preys and that it has the least amount of human interference.

Dholes are protected under Schedule 2 of the Indian Wildlife Act, 1972. They’re also classified as endangered by the International Union For Conservation of Nature (IUCN). The decreasing number of dholes in forests has been attributed to human atrocities. Moreover, building of roads and other infrastructure have led to destruction of their habitats.

However, the reappearing of these species is a very good sign, both for the environment as well as us humans!