Russian Company Trains Dogs To…
We Took A Hot Air…
Work-From-Vacation Season: 5 Stays To…
5 Hotels In Agra That…

Have you ever seen a dog skydiving? A Russian company has completed eight test flights with Russian soldiers doing skydiving by attaching army dogs to their chests. The soldiers with the dogs are being trained to descend on places where it is not possible to land a helicopter or a plane. A video with a German shepherd attached to a soldier flying at around 13,000 feet has already gone viral on the internet. The parachute is seen flying and then landing along with the dog. After the parachute lands on the ground, around four people arrive towards it for assistance.

The Dogs Tried To Catch The Clouds With Their Paws

The Russian defence ministry’s TV channel Zvezda revealed that the dogs followed the commands and were also amazed by the view of the earth from the height. The report also added that they tried to ‘catch’ the clouds ‘with their paws.’ A tweet by @ResPubl79983835 stated, “Russian company Rostec has developed a parachute harness specially for dogs, with a view to eventual use by law enforcement and emergency service animals.” According to a Mirror report, design chief Alexey Kozin has stated that the dog harnesses are engineered to protect the backs of animals.

Russian company Rostec has developed a parachute harness specially for dogs, with a view to eventual use by law enforcement and emergency service animals.

There are going to be some brave but very confused good boys out there. pic.twitter.com/IOQjiwJvKb

The Dogs Need To Get Acquainted With The Soldiers Before Flying

As reported by Mirror, Test parachutist Andrey Toporkov has said, “The most important thing is to get the dogs into the aircraft. They tolerate the flight and even watch the clouds through the window. When the hatch opens, there is wind, noise, and thanks to the dog handler, they calm down.” He also added that the soldiers flying with the dogs need to get the animals acquainted first by petting them and feeding them with the permission of the owner. 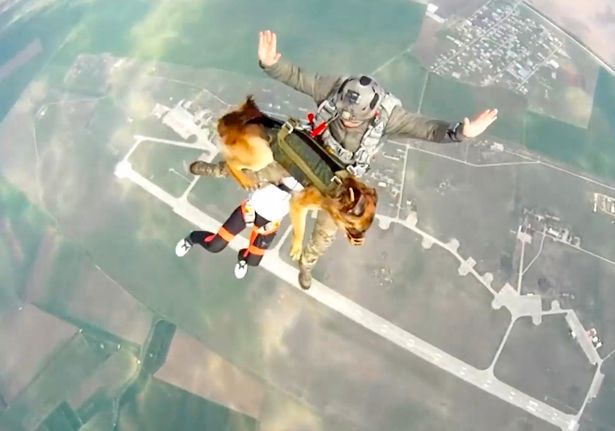 While many people are quite fascinated by seeing the dog parachuting, some have raised questions on animal cruelty. They think that on one hand, the harnesses can be uncomfortable. And on the other, jumping from such high altitudes might be dangerous. What are your thoughts on this?