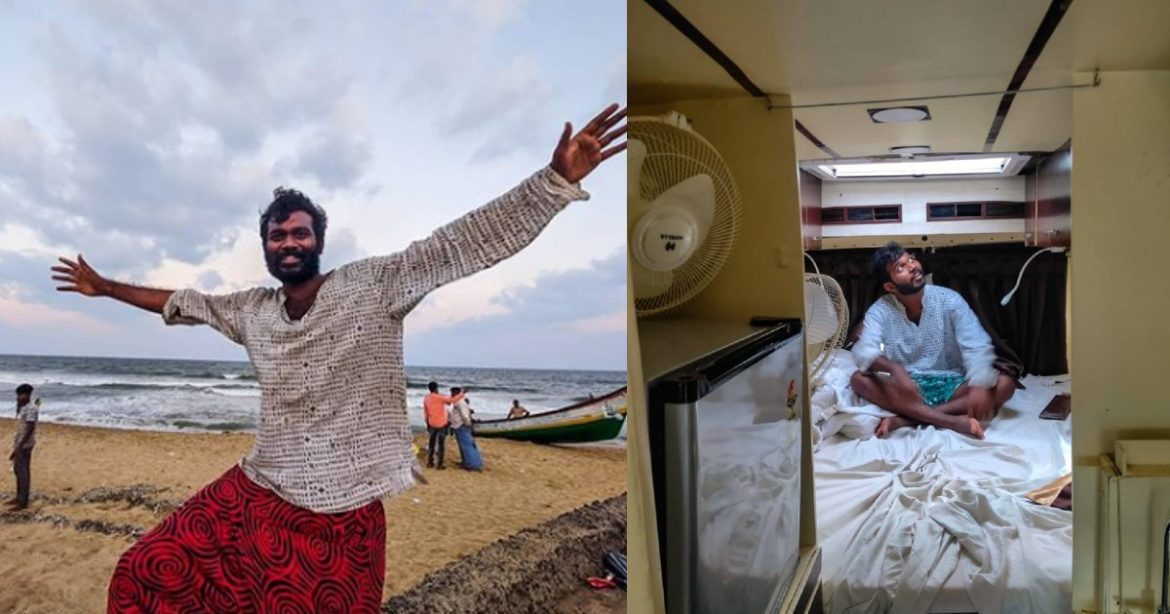 For most of us, travel is leisure. We trek across treacherous mountains, partake in adventure activities, relax on the beach, pamper ourselves in luxurious resorts and then finally come back to our everyday life. For, Vimal Geethanandan from Andhra Pradesh travel is his lifestyle. He left home in 2016, promising to return back after a year of travel. Fast forward to 6 years and he is a full-time traveller, touring across India in his minivan. Here’s his story from dropping out of engineering to inspiring Indians with his caravan travel lifestyle.

Inspiration To  Become A Full-Time Traveller

Vimal Geethanandan revealed to The Better India that childhood fairytales about princes embarking on dangerous missions to become worthy kings brought him into the world of travel. It shaped his mind that travel was the path to something greater. From fairytales, Vimal read autobiographies of Swami Vivekanandan and Steve Jobs who discovered themselves through travel. He saw travel as an inspiration. So, Vimal dropped out of engineering in the third year to travel. While he didn’t attend classes anymore, he continued to frequent libraries where he educated himself on different topics.

A Mini-Van To Invite Folks To His Place

Over the next few years, Vimal Geethanandan lived the life of a backpacker. With just a few pairs of clothes, a laptop, sleeping bag, tent, first aid kit and camera he was on the road, living his life to the fullest. He enjoyed travelling, and meeting people from different backgrounds. During his time he realised that just like people welcomed him into their homes, he also wanted to do the same for them. That’s when he decided to get himself a mini-van.

Vimal worked hard to collect the funds for his dream. From working in his cousin’s food truck, taking up content writing stints, selling tea and finally getting crowdfunding, he had the funds for his mini-van. He revealed to The Better India that in 2020 he had his mini-van Maaya ready to make a debut on the road. His house on wheels was equipped with a bed, two-burner stove, kitchen, shower, beanbag and also a 350 W solar panel. He embarked on his road trip in his minivan from Kanyakumari to Kashmir. He travelled across Andhra Pradesh, Karnataka, Uttar Pradesh, Punjab and Delhi.

Travel Is His Lifestyle

While it may seem like a beautiful life, Vimal does say that backpacking has its own challenges. After all, travel is his lifestyle. In 2021, he contracted Covid-19 while on the road and he had to fend for himself despite his poor health. Once his water supply ran out and the nights were filled with mosquitoes and rats. But despite the adversities, he believes the universe has always been on his side, connecting him to good people who have helped him. Vimal Geethanandan’s life is travel. And his experiences with people and their stories to tell have truly made travel inspirational for him.