A lot of women, who are travel enthusiasts, are breaking stereotypes and embarking on solo trips through mountains, beaches, forests and scenic roads. While a solo trip itself needs a good deal of courage, most women go for planned trips with fixed tourism packages. But Shraddha from Pune took the solo trip game a notch higher. She set out to explore the interiors of Maharashtra all by herself majorly through public transport and hitchhiking. Yes, there were risks involved. But she had the soul of the adventure to transcend all the fears and uncertainties. Here’s Shraddha taking over to narrate her incredible journey. 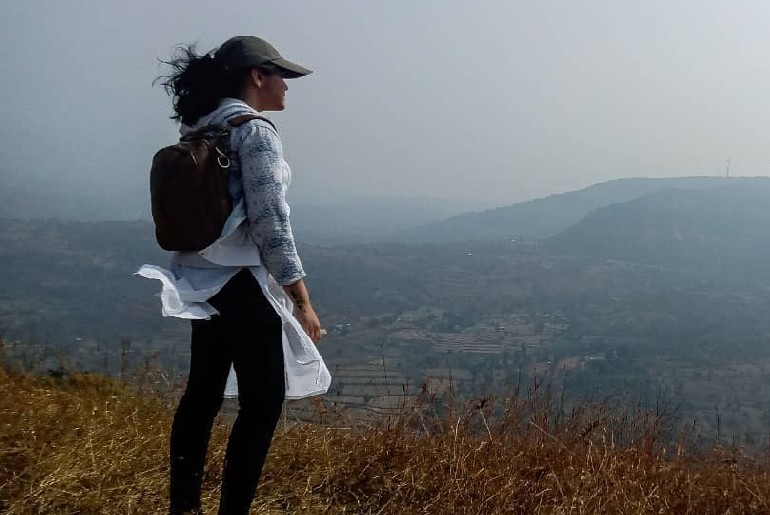 I am Shraddha – a Pune native, an Indian and a Chartered Accountant. I left my career in the corporate sector to become a full-time world traveller. I am currently exploring my home country – India. And I have been to four countries in Europe. Here I am going to narrate the story of my solo journey in Maharashtra. I travelled over 2200 km across Maharashtra majorly by public transport and hitchhiking in a short span of 21 days. This journey was challenging yet fun at every step of the way. I visited 41 villages and cities, went to 22 beaches and saw 18 temples from different eras. From trains to ferries to buses to bikes I travelled in 7 different types of transport.

I travelled majorly by public transport and hitchhiking. To be precise I covered almost 1367 km by Mstrc buses and 760 km by hitchhiking. I had a rented bike for 58 km and I covered another 15 km I covered by foot.  That is roughly 2200 km across Maharashtra, which comes to an average of 105 km/day. The distances were calculated using the best route on Google maps, which means the actual distances are even more.

More than a journey, to me, this trip was a learning experience too. I learned hitchhiking, pole fishing, setting up a tent, building up a campfire, bird watching and yes, I picked up the hack of making decisions quickly.

My Maharashtra itinerary was something like this – I went slowly from Pune to southern Maharashtra till Kolhapur. After Kolhapur, I diverted my route to Malvan. Then I continued along the coastline from Malvan towards North till Murud. After Murud I came home to Pune and rested for 3 days. Then I resumed my earlier planned trip from Mumbai towards northern Maharashtra. My trip ended with a sunrise trek at Kalsubai – The highest peak of Maharashtra.

My intention behind using public transport for this entire trip was to minimize my carbon footprints. But I overestimated the efficiency and availability of state-run public transport. The proudly called Laalpari or MSRTC buses in Maharashtra are way better than the public transport in any other state in India. But they were still not enough for me. In several places, I was stuck with no public transport or the buses had some odd timings which were not suitable for me. And that led to hitchhiking for about 760 km in the most rural parts of Maharashtra.

Moreover, I used only 1 plastic packaged water bottle, and that was because the hotel refused to give me their regular tap water. Everywhere else I insisted on drinking regular tap water and I ended up drinking from numerous dams, rivers and wells across Maharashtra.

Hitchhiking As A Solo Female

I did the majority of the travelling and especially hitchhiking during the day, in broad sunlight. I always planned to reach my hotel before sunset. I still remember my first hitchhiking experience. I stood awkwardly showing my hand to random bikes outside the Wai bus stand. At the same time, I was trying to memorise all that I had read about hitchhiking on the internet. 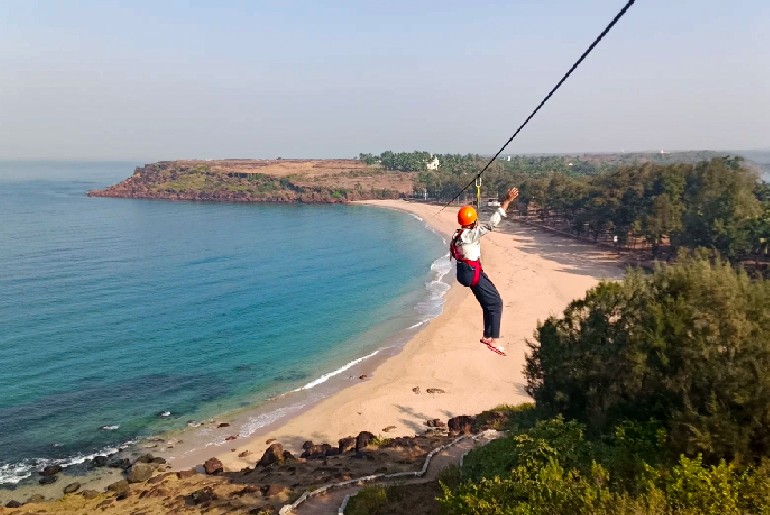 I had figured out that going with a bike would be safer than hitchhiking inside a car. But that was physically very challenging and painful in the mountain ghat roads. I constantly felt that my over-packed rucksack was pulling me down whenever the road was going uphill. 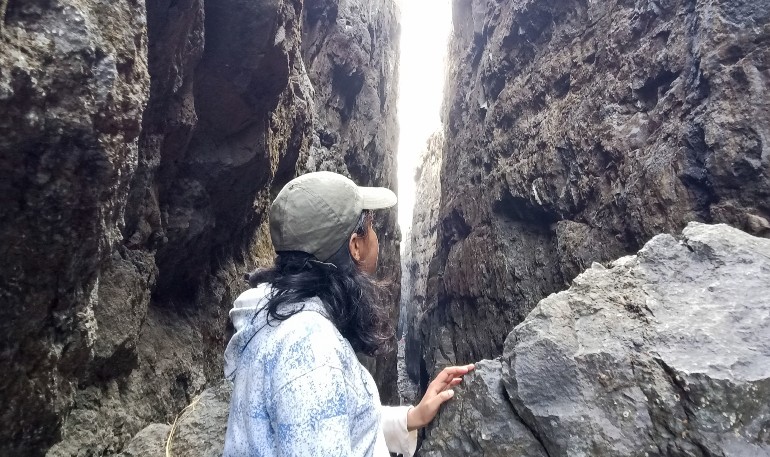 Apart from this little inconvenience my experience was quite exhilarating. I was taken through backcountry roads, where I would never go if I was on my own on bike or in my car. I heard so many stories and struggles of the common people. And I ended up inspiring a few people with my story.

The time When I Was Stuck

When I was a kid I had heard this story from my neighbours in Pune about – Ganpatipule temple. They described it as a unique beachside temple near Ratnagiri where all the roads end. Fast forward to today they have good roads and ferries connecting this region near Ratnagiri. But there was no public transport. 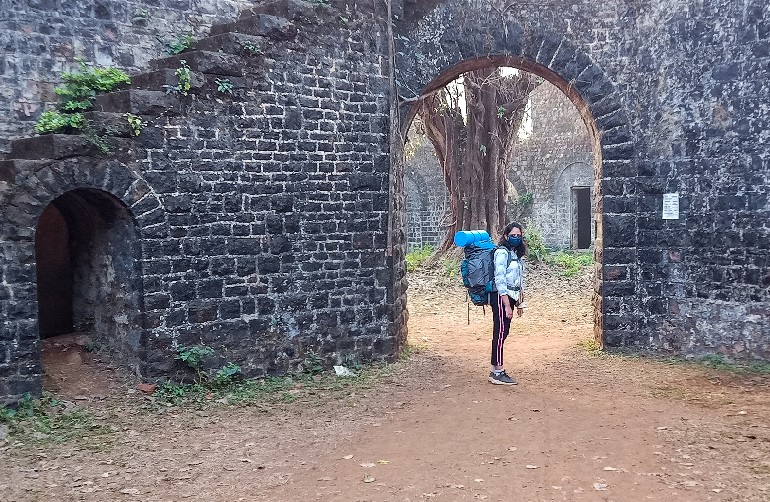 I had started early from Ratnagiri and I came to Ganpatipule temple. After seeing the beautiful beachside temple I headed next to Guhagar. I waited for 3 hours at the bus stop, but no buses were arriving. I tried hitchhiking but that didn’t work either. In the end, I had to backtrack to Ratnagiri and then take a bus to Guhagar. I spent that whole day on a bus and reached Guhagar just in time for the sunset.

Giving Up Is Good Sometimes

I had planned this part of my trip to be from Malvan to Mumbai. But fatigue and realisation took over me. The beaches from Murud to Alibaug are extremely touristy due to their proximity to Pune city. They were crowded at the time and I had already seen most of them before.

So from Murud, I went to my home in Pune. I did my laundry and rested in Pune for 3 days. Then I resumed my journey to Mumbai and northern Maharashtra. I ended this trip with a sunrise trek at Kalsubai – the highest peak of Maharashtra. 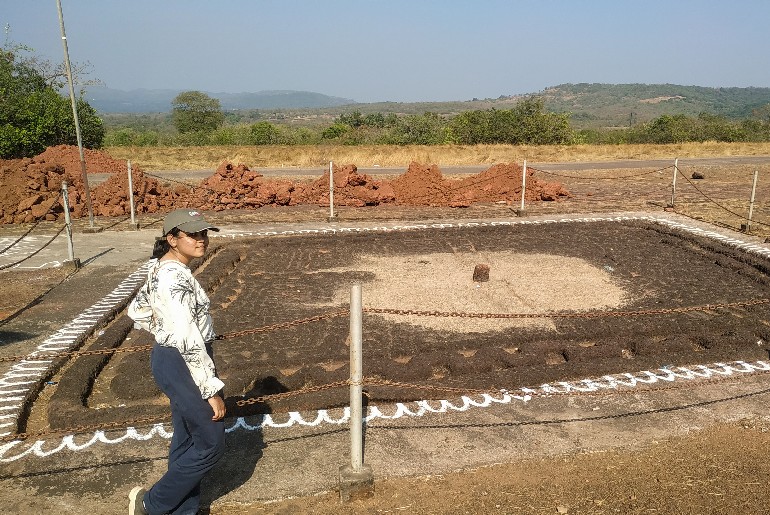 But that wasn’t the initial plan. I had planned to go ahead to eastern Maharashtra after the Kalsubai trek. But I cancelled this plan due to the rising number of covid cases in Aurangabad and other areas in eastern Maharashtra. This was the best decision because ending this trip with a sunrise at the highest peak of Maharashtra is something I will always cherish.

Also Read: 5 Scenic Hiking Trails That Will Remind You Why Maharashtra Is The Best State

Everyone told me that hitchhiking is very risky. They said travelling alone for a girl in India is risky. So I had mentally prepared myself that something might happen on a journey that was this long. But surprisingly and thankfully nothing bad happened.

Almost everyone I met asked me the question, “Are you travelling alone?” When I said yes, they would ask it again with disbelief. In Radhanagari, I met some police officers at dinner, who after hearing my story and further travel plans asked me, “Do you know karate, taekwondo or are you carrying a gun?” I just laughed, tapped my head and said, “This is my only strength.”

Also Read: Mumbai To Goa Road Trip: Here’s Where To Eat, Stay & Relax On The Way

The world outside is just as you believe it is. If you start with a positive mindset that all good things are going to happen, then nothing bad will happen to you. But you also have to use a fair bit of common sense and judgment to protect yourself and have a great journey as a solo female traveller.