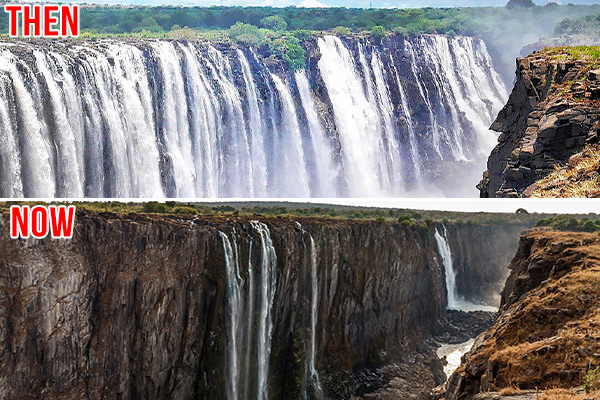 The largest waterfall in the world, Victoria Falls on the Zambezi River in Africa has been hit by the worst draught in the century. Victorial Falls has dried up to a trickle. This gorgeous waterfall is known as one of the Seven Wonders of the World. It’s widely known by the natives as Mosi-oa-Tunya, which means the smoke that thunders. Yes! That was the magnanimity of these waterfalls, that attracted people from all over the world to Zimbabwe and Zambia. But now this tourist attraction has been badly affected by the drought and climate change. It has been left to just stones and boulders, with trickles of water flowing down. 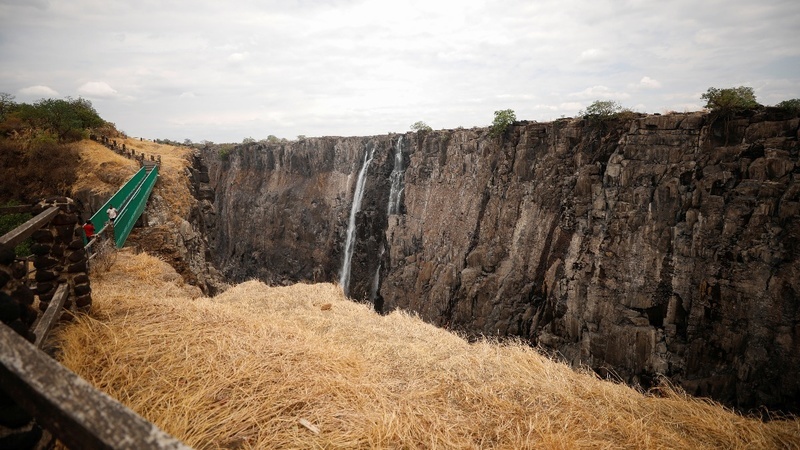 According to an acclaimed global news agency, Victoria Falls usually slows down during the dry season, but this year in particular has resulte in a huge decline in water levels. A handicrafts seller, Dominic Nyambe has stated that in the precious years, the falls wouldn’t dry up to this extent. And this is the first time that localites are experiencing such a drought in Africa.

Tourism too has taken a hit since tourists research about the falls beforehand, and don’t visit this attraction. Not just tourism, even the basic electricity in the area is affected, as Zambia and Zimbabwe both depend on hydropower. They receive hydropower from the Kariba dam situated on the Zambezi river upstream of the waterfalls. The problem of power cuts too prevail in the area. The Zambezi River Authority have released data which depicts that the waterflow since 1995 is at its lowest.  Some areas have low water flow and others are just reduced to dry stones. And while some are debating this is beacuse of climate change, others aren’t sure about this phenomenon. Hydrologist at engineering firm Poyry and a Zambezi river expert, Harald Kling has stated that its difficult to prove that this is caused due to climate change, as droughts have always occured. But if the frequency were to increase, then it can be due to climate change. He further informed that the last drought occured 3 years ago and since then the river has become warmer. Around 437m cubic metres of water was evaporating every second. Did you know, you can Cruise Through Takachiho Gorge, A Volcanic Canyon By A Waterfall in Japan

On the other hand, the president of Zambia, Edgar Lungu has called this incident of the Victoria falls drying up as a stark reminder to everyone about the harsh impact of climate change on the environment. Richard Beilfuss, Head of the International Crane Foundation, who has studied the Zambezi River for the past 3 decades, feels that climate change is the reason behind the monsoon delay. Stretches of this kilometer long waterfall is reduced to dry rocks and scientists out there do blame climate change. Well, we do hope that Africa witnesses monsoon soon, and the Victoria Waterfalls revives itself to the wonder that it is. Taj Mahal too is affected by Climate Change, In More Bizarre News: Taj Mahal Gets 2 Airpurifiers To Combat Air Pollution,