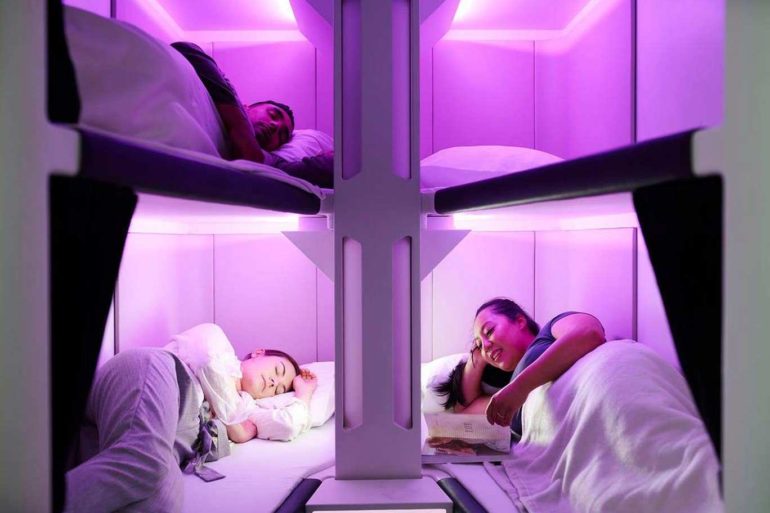 I love air travel. Reaching the airport a few hours early, strolling around the duty-free, grabbing a bite of mild-tasting airplane food or just immersing myself in the in-flight entertainment, it’s an entire experience by itself. But what I don’t like is sitting long hours crouched in my seat. No matter how cushiony airline seats claim to be, it’s just uncomfortable to sit cramped in one place, in one position for a very long time, let alone sleep like that. If you’re nodding in agreement with me, then there’s a ray of hope for us. Air New Zealand recently announced that it would be having bunk beds for economy passengers for some of its long-haul flights. But just like all good things come to those who wait,  we’d have to wait for more than a year before we can get the chance to sleep in one of the new bunk beds. Air New Zealand stated that it had filed patent and trademark applications and called its bunk beds as Economy Skynest. The Skynest would have six full-length sleep pods which will be 6 feet long and 22 inches wide each. There will be 3 levels of beds with two at each level. Beds will have a full-size pillow, sheets, blankets, ear-plugs and a privacy curtain. The airlines is currently assessing if they can include other features like a reading light and USB outlet.

Also Read: Fly In A Zero-Gravity Flight And Experience Floating In Space Like An Astronaut Mike Tod, the Chief Marketing and Customer Officer of the company announced that the sleep pods or bunk beds would be aimed at some of Air New Zealand’s longest haul flights which include the Auckland to New York service. This flight would be launched next year and takes 17 hours and 40 minutes. Depending on the route they would take a decision whether to go ahead with Sky Nest or not. Did you know a Flight Made Emergency Landing In India After Woman Finds Out Husband’s Affair? 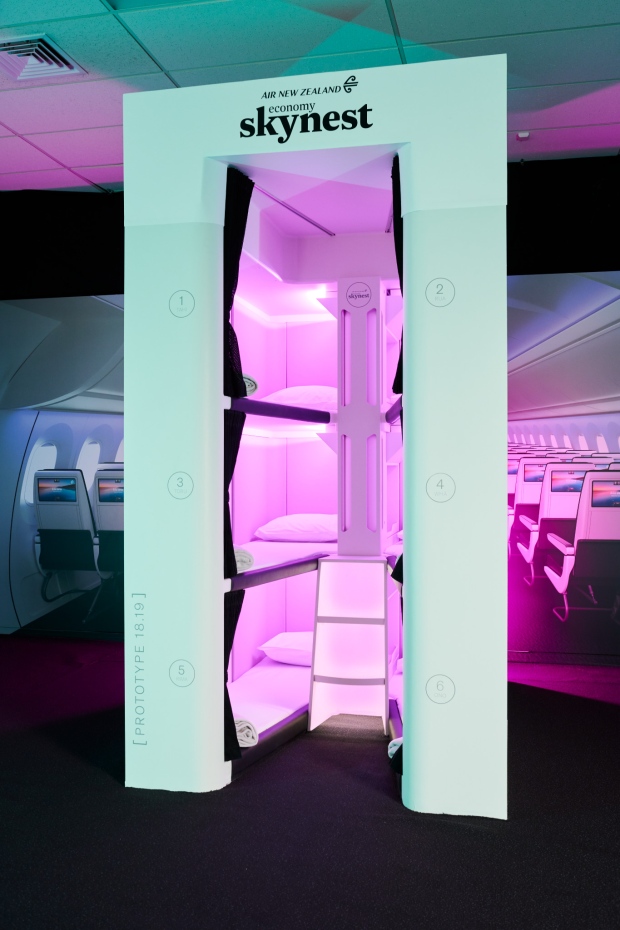 A spokesperson for Air New Zealand revealed to the Guardian Australia that the cost of the bunk beds for customers is yet to be fixed but it would be separate to the cost of booking a seat. The concept is developed and designed as a pod, which you can go to during the flight. So passengers can still have their economy seat separately for the remaining portion of their flight. The spokeswoman stated that passengers can book a session in the bed during the flight instead of the whole flight. Cabin crew can change and freshen up the pods with new bedding for the next session. When it comes to sleeping pods, IRCTC Will  Build First Pod Hotel At Mumbai Central Railway Station These pods need to be first certified by regulators before customers can climb into the in-air beds. The head of the airline programme of Air New Zealand, Kerry Reeves believes that this is a prize worth changing and has the potential to be gamechanger for economy class passengers across all airlines in the world. This indeed will be a gamechanger and I’m sure its something all of us would look forward to as a respite from our in-flight leg cramps.