In case your office starts and you don’t feel safe enough to commute via public transport, you might be able to hire a cycle in Delhi to reach your workplace. App-based companies Yulu and Smart Bike provide battery-operated cycles on rent in the Capital. Smart Bike provides weekly and monthly passes at ₹199 and ₹399 each. One can also hire these cycles on an hourly basis with rates starting from ₹10 for the first 30 minutes. at They are planning to expand their services post lockdown for the convenience of the city people. Yulu provides bicycle services at the metro stations of Delhi by collaborating with the New Delhi Municipal Corporation (NDMC). Smart bikes run mainly in the Lutyen’s Delhi region. If the expansion happens, there will be bike stations in more than 130 residential areas in Delhi by 2020 end. Read on to know the details.

At present, Yulu operates in 25 areas including Saket, Lajpat Nagar and Vasant Kunj. It is thinking of coming up with about 100 new zones in CR Park, Hauz Khas, Pushp Vihar, Aurobindo Place Market and more. These new zones might be set up within the next three months. There are 49 Smart Bike stations in Delhi now. The company is mulling over creating 30 more stations. Rates of these cycles start at ₹10 for the first 30 minutes. Also, Smart Bike provides weekly and monthly passes at ₹199 and ₹399 each.

Also, the companies are taking up measures like disinfecting vehicles several times a day with tech-enabled sanitization procedures and updating the ‘last sanitized’ timestamp on the app.

Also Read: Rent Electric Scooters In The UAE Through Qwikly

Dedicated Paths For The Cyclists In Delhi

Earlier, Delhi had begun constructing a 200 km long path for cyclists. This ‘green makeover’ of the city to curb pollution had an estimated budget of ₹550 crores. It will be developed in phases and should be finished by 2024.  The DDA had reportedly informed that three areas were chosen for “fast and quick development.” Nilgai Line is 20.5 km from Badarpur to Malviya Nagar metro station; Peacock Line is 8.5 km from Malviya Nagar metro station to Vasant Kunj Mall, and lastly, Bulbul Line is 7 km from Chirag Dilli to Nehru Place and ISKCON Temple. 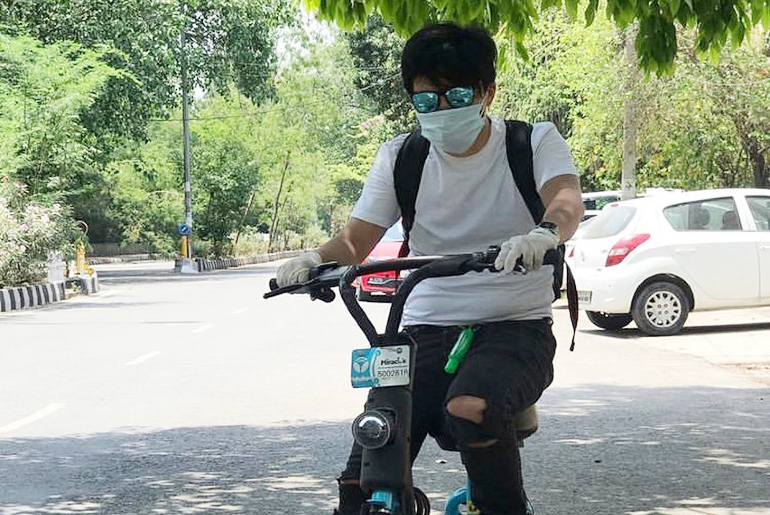 Also Read: This is Where You Enjoy Segway in Delhi

As per the recommendations of the Centers for Disease Control and Prevention (CDC), the safest modes of travelling amid pandemic are solo driving, walking and cycling or biking. Thus, these services will ensure socially distanced travel for commuters after lockdown. On that note, did you know about this cafe in Chennai which is a hub for cycling enthusiasts?