Garland Made Of Notes Worth…
UAE Hotel Occupancy Soars To…
Activities For Kids In Dubai:…
Omicron Restrictions: Here Are The…

Garland Made Of Notes Worth ₹44444444.44 Crores Offered To Goddess Kanyaka Parameshwari In Telangana

4 crores, 44 lakhs, 44 thousand, 444 rupees and 44 paise! Yes, that amount of money was pulled in by the business community Arya Vyshya Sangham to offer a garland to Goddess Kanyaka Parameshwari in Mahabubnagar, Telangana. Currency notes of ₹500, ₹100 and ₹20 denominations were used for making the garland for the Goddess. Also, the entire temple got decked up in notes on the fifth day of Navratri, as part of Mahalakshmi avatar. The entire money was, however, returned to the contributors at night.

Every Year, The Temple Follows The Ritual Of Currency Note Decoration

This is not the first time the authorities are decorating the temple with currency notes. In Dussehra 2020, flowers made of ₹1.1 crores were used to decorate the shrine and the Goddess. Folded currency notes valued at ₹1.1 crores were used to make garlands and bouquets. This year, the currency amount exceeded a whopping 4 crores. In 2019, the temple had dressed the Goddess in currency notes worth ₹3,33,33,333. The shrine is nestled around 180 kilometres south of Hyderabad. As part of the Navaratri-Dussehra festivals, the Goddess is worshipped here as Dhanalakshmi or Goddess of wealth. 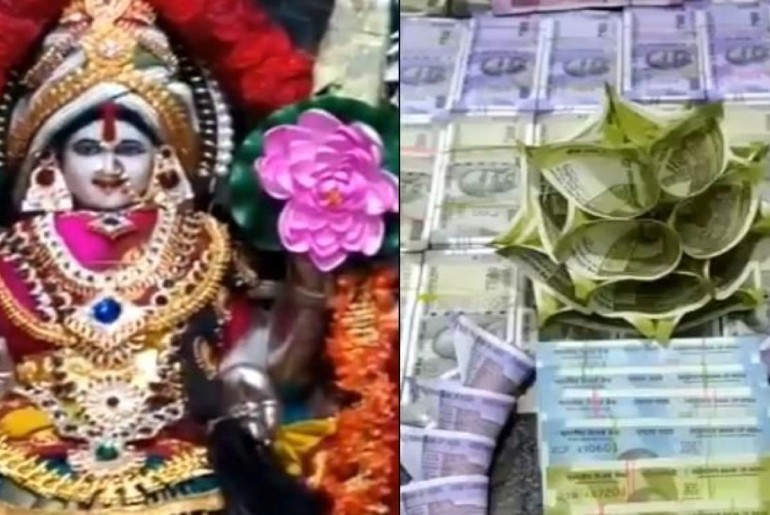 The Entire Money Was Given Back To The Contributors

The shrine accumulated money of over 4 crores this year which was used to adorn the temple and the Goddess. However, at night, the entire money used for the decoration was returned to the contributors. On that note, did you know that J&K’s Iconic Vaishno Devi Temple Got ₹2000 Crores Cash & 1800 Kg Gold In 20 Years? Also, India has some Wealthiest Temples With More Money Than The Billionaires.