India’s First Cable Stayed Rail…
India Gets Its First-Ever Alcohol…
Vaccinated? This Diwali, Fly To…
Here’s How To Make Your…

India’s very first cable-stayed railway bridge, the Anji Khad Bridge will come up at Jammu and Kashmir soon. Perched at a height of 331 metres above the Chenab river bed, the engineering marvel will be flanked by the mighty Himalayas. The total length of this bridge by the Indian Railways will be 473.25 metres. The Anji Khad Bridge will connect Katra and Reasi in Jammu and Kashmir. The bridge is a part of the Udhampur-Srinagar-Baramulla Rail Link (USBRL) project. The Konkan Railway Corporation Limited (KRCL) is developing it, under the government. On that note, have a glimpse into the stunning cable-stayed bridge of Hyderabad. 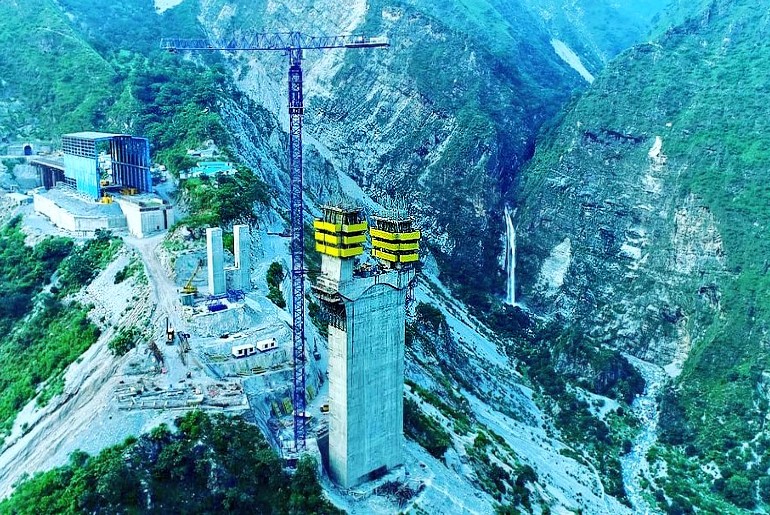 The very first cable-stayed Indian Railways bridge of India, the Anji Khad Bridge, having a length of 473.25 metres will soon come up at Jammu and Kashmir. It will connect J&K’s Katra and Reasi. On December 18, Northern Railway has tweeted about the bridge, stating, “The Engineering Marvel- Indian Railway’s first Cable-Stayed Bridge – the Anji Bridge, Coming up on Udhampur-Srinagar-Baramulla Rail Link (USBRL) section of Northern Railway in Jammu & Kashmir.” The bridge will be at an altitude of 331 metres above the Chenab river bed.  The captivating vistas of the lofty Himalayas will surround the bridge. The bridge construction is in progress in the Udhamur-Katra, Katra-Quazigund and Quazigund-Srinagar-Baramulla sections. Meanwhile, India’s first glass skywalk is high above the mountains in Sikkim’s Pelling.

The construction of the bridge in the high altitude had been challenging for the Railways. Construction of an arch bridge seemed difficult, owning to the complicated geology of the area. Thus, the Anji Khad Bridge has a single pylon, constructed using micropiles on a vertical slope. The Udhampur-Srinagar-Baramulla Rail Link project is the most challenging railway project in India.

The cable-stayed bridge has been designed to withstand heavy storms and turbulent winds of the high altitude. Many unique and advanced technologies have been used to build the bridge. For example, the Pump Concreting System scaled up the efficiency of workers, reduced construction time and ensured greater safety. Meanwhile, did you ever have a thrill ride over India’s oldest and most dangerous seabridge, the Pamban Bridge?