With ‘many firsts’, India will soon get it’s very own vertical lift sea railway bridge. This is under construction at Rameshwaram in Tamil Nadu. The new vertical railway bridge shall connect mainland India to Pamban. Union Railway Minister Piyush Goyal-led Indian Railways is in charge of this construction.  With an estimated worth of  ₹250 crores, the Rameshwaram railway bridge will undergo completion in the next two years. This will definitely be one of the most stunning bridges in the world that shall make your head spin.

Piyush Goyal-led Indian Railways is currently in charge of constructing India’s first vertical lift sea railway bridge in Rameshwaram. The work of constructing a pillar in the sea to build a vertical lift railway sea bridge has already started in Rameshwaram. The construction began on November 8, 2019, and will be completed in the next two years. This first-of-its-kind project would be 2.05 km long, connecting the mainland to Pamban island. 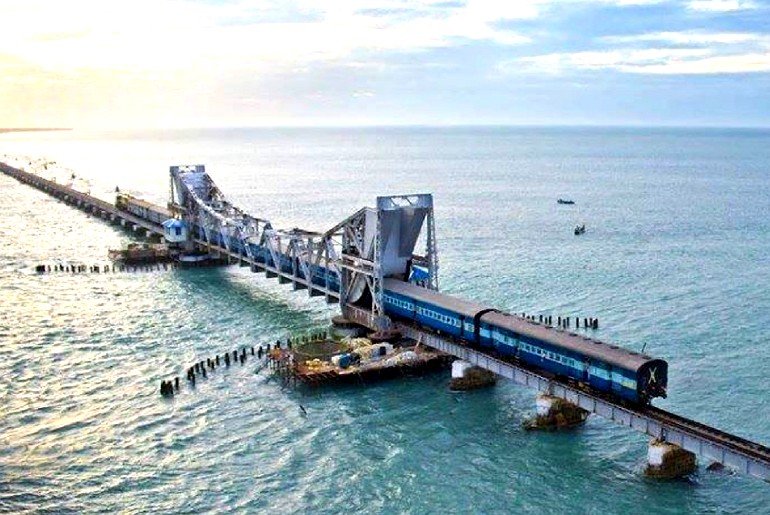 PM Modi Laid The Foundation Of This Bridge In March 2019

This bridge will also have India’s first vertical launch rail section, which is quite interesting. The Railway Minister Piyush Goyal shared an animated video on Twitter of the vertical lift sea bridge on its completion.  In his tweet, the minister wrote, “Good News For Devotees of Ramanathaswamy Temple: Work on India’s First Vertical Lift Railway Sea Bridge is in full swing at Rameswaram, Tamil Nadu. Foundation stone of this 2 KM long bridge, connecting Rameswaram on Pamban island & mainland India, was laid by PM @NarendraModi ji”

Prime Minister Narendra Modi laid the foundation stone of this bridge in Kanyakumari in March 2019. The bridge will help the Indian Railways’ trains to run at a higher speed, with more weight on the route. In addition, it will also maximise the traffic volume between the mainland of Pamban and Rameswaram island, which has a huge religious significance. It’s indeed a pride for Indians that we will have our country’s first vertical sea bridge across the clear vast waters of Rameshwaram. Until then, have a look at this video of Rameshwaram to understand the city better.