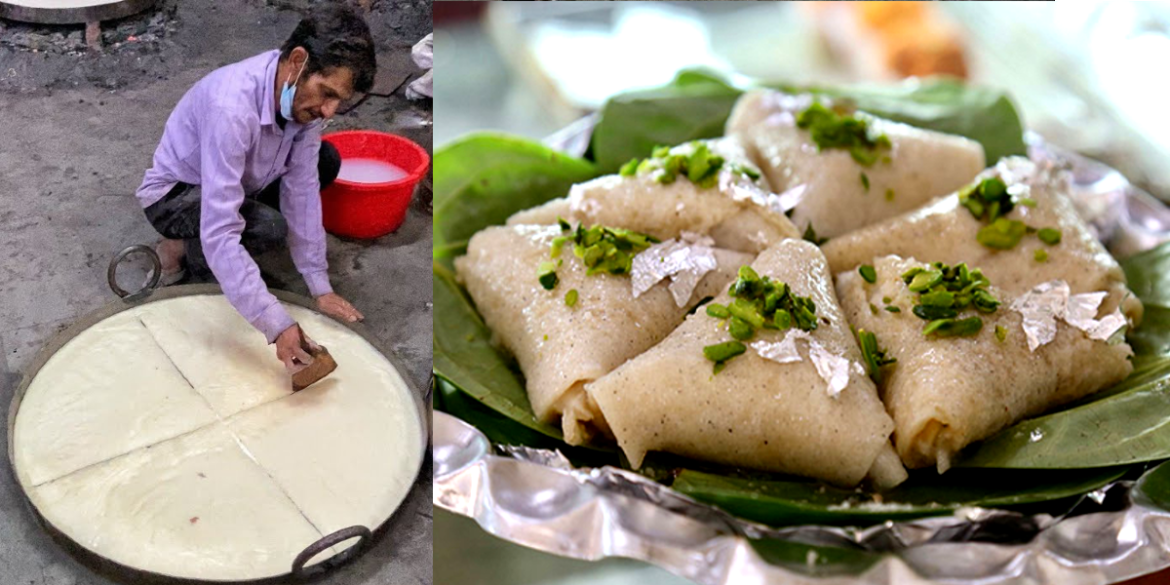 The history of Lucknow’s special Malai Gilori or Malai Paan dates all the way back to the 1800s. The royal well-wishers of the Nawab of Awadh, Wajid Ali Shah visited the confectioner, Ram Asrey to persuade the Nawab to give up his habit of eating paan (betel leaf). The chefs invented a rich sweet made of Malai, stuffed with dry fruits and rock sugar (mishri), and folded it in the shape of a paan. The Nawab instantly fell in love with the Malai Paan that looked just like an ordinary paan but tasted nothing less than royalty. With this backstory of Lucknow’s Malai Paan, read on to watch the making of this dish, that’s leaving us drooling.

A video posted by food vlogger @foodie_incarnate on Instagram shows the making of Lucknow’s special malai gilori or malai paan. In the fascinating video, a halwai(cook) is seen boiling milk in a huge vessel. It’s next slow-cooked in thick and flat pans on an open-coal based fire. The milk turns into thick cream or malai. The cook next goes on to cut the thick cream into huge slices in diagonal shapes. The malai pieces are then cut and folded in the shape of the triangular paan and stuffed with dry fruits like almonds and pistachios. For an extra twist of royalty, cardamom and rock sugar or mishri are added to the stuffing. You can savour the malai paan at Lucknow’s Ban-Wali Gali, Chowk Bazaar for ₹680 per kg.

Also Read: From Kulfi Paan To Perfume Paan; Try Over 100 Varieties Of Paan At The Paan Studio In Bangalore

This Paan Doesn’t Have Any Betel Leaf

The malai paan video instantly went viral garnering 1.9 million views and 110k likes. Netizens were awe-inspired by the dish and many wanted to taste this. This royal indulgent mithai is called malai paan but it doesn’t have betel leaves. The shape of a paan and the use of dry fruits is why it’s referred to as malai paan. It takes hours of sincere effort and attention to detail to prepare this intricate dish. When in Lucknow, make sure you try the Malai Paan. Meanwhile, here are the top 10 delicacies you must try in Lucknow.