Many tourists love to witness wild animals roaming freely in sanctuaries right before their eyes. However, the potential threats of wildlife should not be ignored. Taking risks with wild animals might lead to dangerous consequences. In a recent video shared by Indian Forest Service official Parveen Kaswan, a herd of wild elephants is seen crossing the road. The video is from Assam, which houses the second-highest population of wild elephants in India. While the elephants were crossing the road, some people were seen provoking them. On top of that, the constant honking of the cars probably added to the irritation of the animals. Out of anger, one of the elephants pulled a man and trampled him. The 45-year old victim, identified as Pachkal Mura, lost his life after the attack.

Elephant Kills Man Is Assam After Being Teased

Sharing the video, IFS Parveen Kaswan stated, “A human lost his life. I wonder whom to blame.” The video was taken on July 25 on a national highway outside a forest reserve in Assam at around 5 PM. In the video, a man in a purple shirt was seen bothering the herd with a yellow cloth. Due to the irresponsible behaviour of the young crowd, another man succumbed to death.

A human lost his life. I wonder whom to blame. pic.twitter.com/KQVGzRq0Ca

Commenting on the video, netizens wrote that the humans are to be blamed for the situation. One user wrote, “Elephants due to their long ears are highly sensitive to sounds. They can hear infrasounds (below 20 Hz) which humans cannot. Naturally, when humans talk loud & gather in large numbers, the elephants feel threatened.” Another wrote, “Quite insensitive to the quietly passing herd. On what dimension, did the boys around think they are stronger than a single elephant, let alone the herd.”

Earlier, Indian Forest Officer Surender Mehra had shared an 11-second video clip on Twitter that went viral. In the video, a giant elephant was seen walking towards an open jeep full of people. Moments after a woman in the jeep said, “Kuch Nahin Hoga” ( Nothing will happen), the elephant increased its pace and started rushing towards the jeep. It prompted a man to say “Bhaga bhaga” ( Run away). The elephant put the recorder off-focus making a loud trumpet-like sound.

One person commented, “People don’t know that an angry elephant is more dangerous than a tiger or leopard and can injure or kill several. One should never take any wild animal for granted, especially an elephant.” Another wrote, “When in wild, behave responsibly.” A concerned user also commented, “May be not the video but pls share what happened next as the Elephant was furious and these people were not able to drive back. Hope all well and no major accident with them. Pls Share. Thanks.” 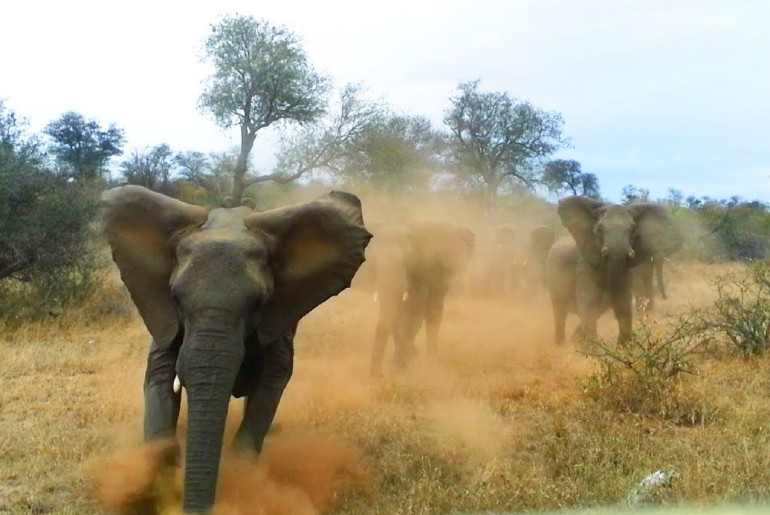 The Clips Teach Us A Lesson To Respect Mother Nature

The clips definitely teach us a lesson to respect mother nature and its inhabitants. So, the next time you go on a jungle safari, refrain from taking chances that can harm you and your closed ones. For now, enjoy this virtual tour to the jungle of Kanha in Madhya Pradesh: