5 Best Firework Displays In Dubai That Are A Real Treat For The Eyes!

The heart-stopping fireworks display in Dubai is unquestionably one of the many miraculous and thrilling reasons to look forward to, at the time of shimmery festivals and grand glittery ceremonies. Here’s a glitzy list of the best fireworks exhibits in Dubai that’ll tingle your spine if you happen to witness any.

The lavish celebration at the iconic building has already nailed a world record for the largest LED-illuminated façade in the world as part of the New Year’s Eve celebrations on Dec 31, 2014. In fact, the Burj Khalifa fireworks have possibly become identical to New Year’s Eve in the Middle East. Whether you’re in Fujairah or Jebel Ali, everyone makes their way to see the Burj Khalifa light up to its titan fame.

Also Read: 5 Places In Dubai Where You Party For Free This New Year 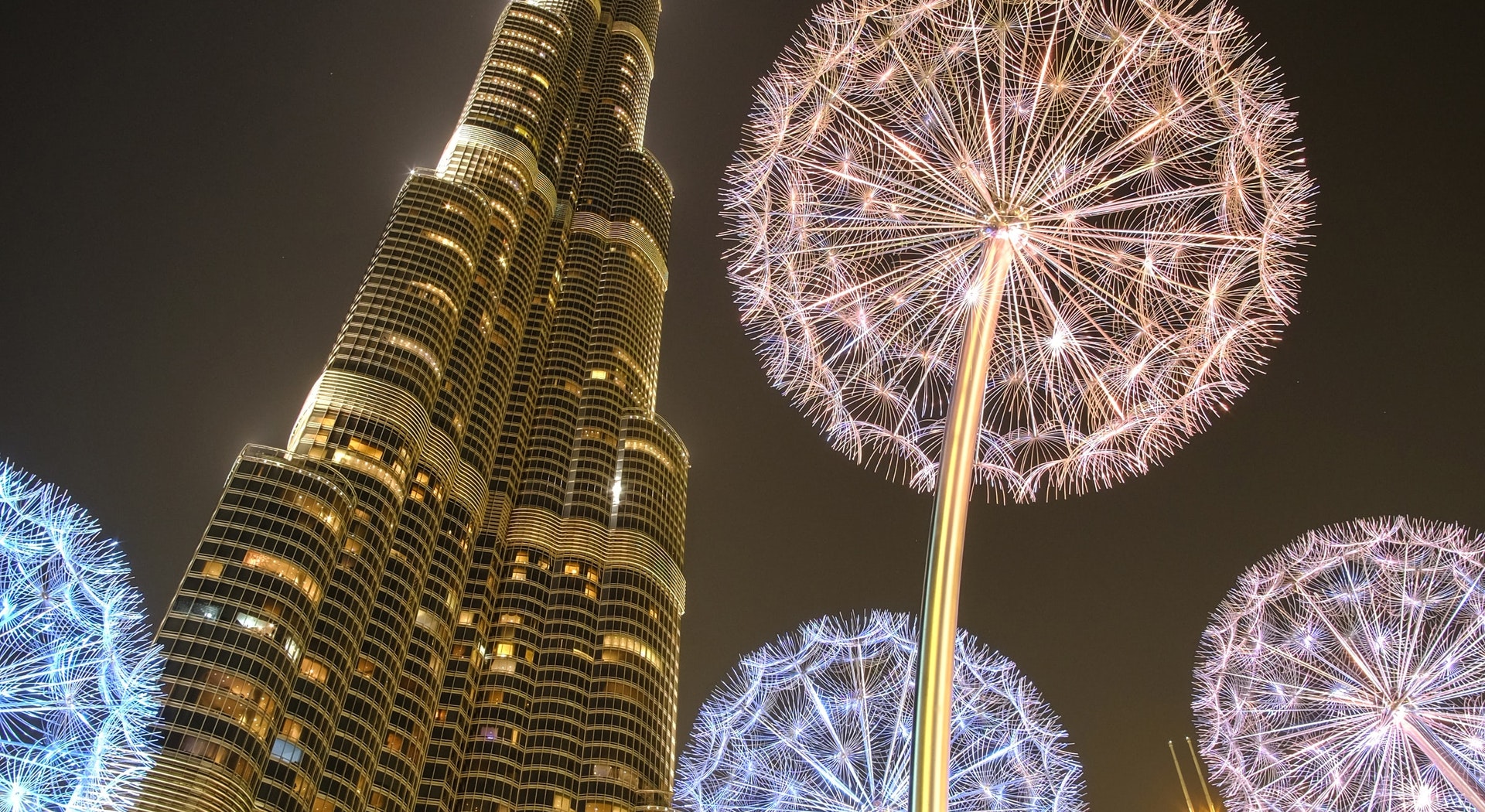 The iconic hotel has caught innumerable awards and laurels. In reality, it got designated as the most ‘Instagrammed hotel in the world. Additionally, the fireworks at the Atlantis in 2014 played such a vital role in getting Dubai the Guinness World Record for the greatest fireworks in the world. Designed by ‘Fireworks by Grucci’, the fireworks fair at Atlantis is slotted to be one of a kind. 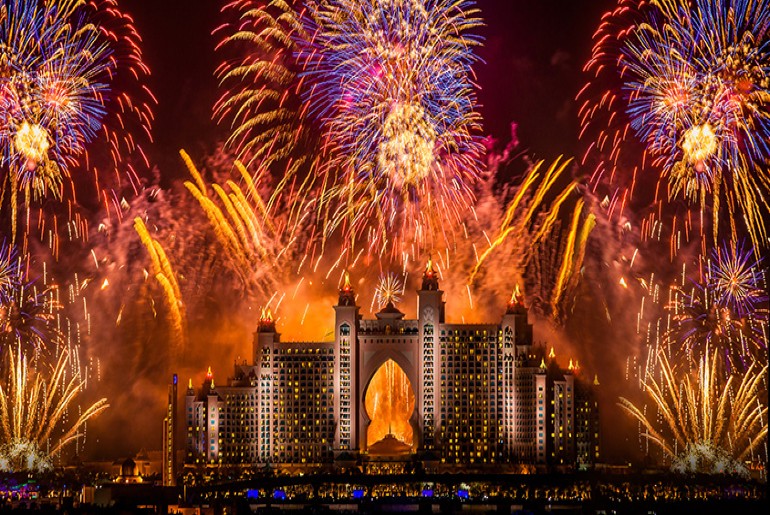 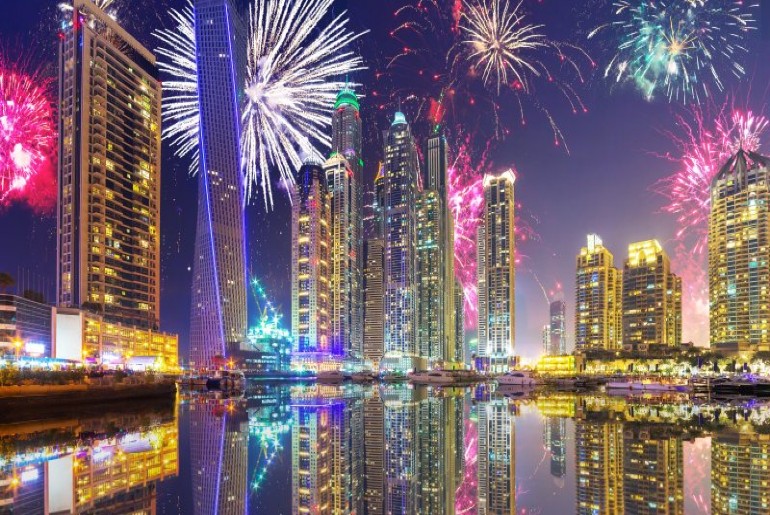 The family destination Global Village had already snagged its position in the Guinness Book of World Records with its record for ‘Highest altitude skydiving fireworks display’. Did you know that it etched its name in history by meeting its target of breaking in a total of 25 Guinness World Records? Unbelievably true!

The large Ferris Wheel in Fantasy Island displays the 10-second countdown and as the bell strikes midnight, spectacular fireworks are launched from various sites. 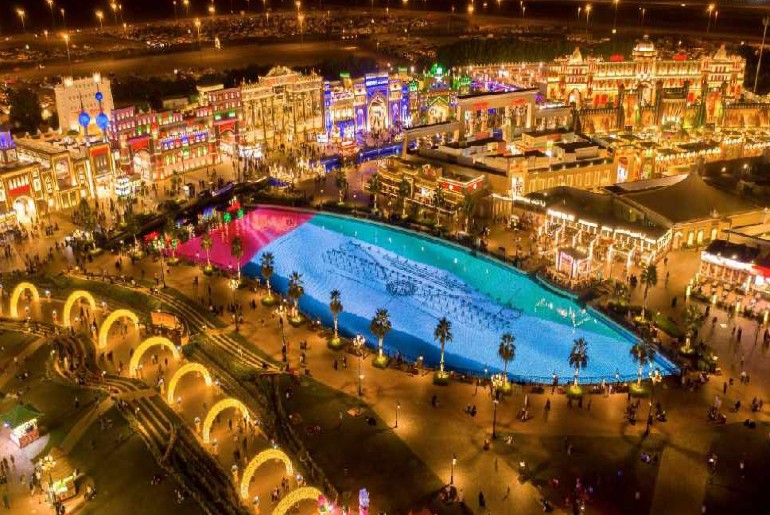 Amusingly, the fireworks show synchronizes to music at Madinat Jumeirah and start at 12.09 am for a duration of 6 minutes. It is further followed by a 90-second pause after which the show continues for another 6 minutes.

All guests staying at the resort get private beach access to watch the fireworks while others can book a reservation at various restaurants or lounges on New Year’s Eve to enjoy the show. 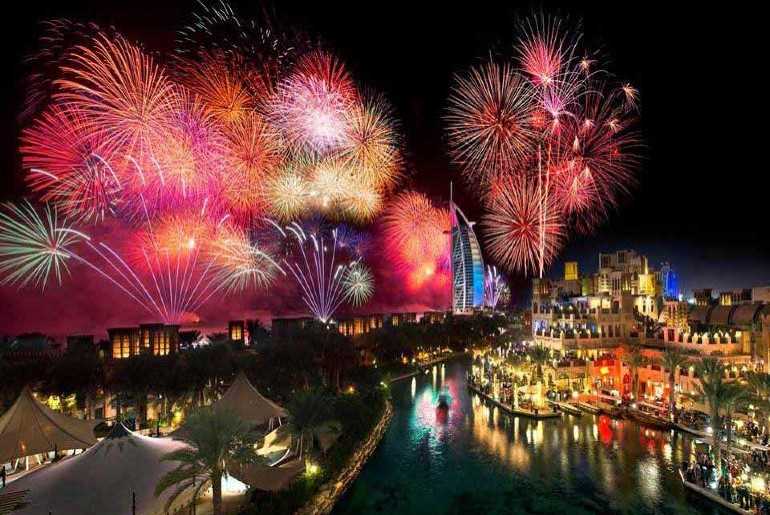 Hold your breath, get your phones, cameras, gather your friends and family and head to these iconic treasures to pamper your eyes.