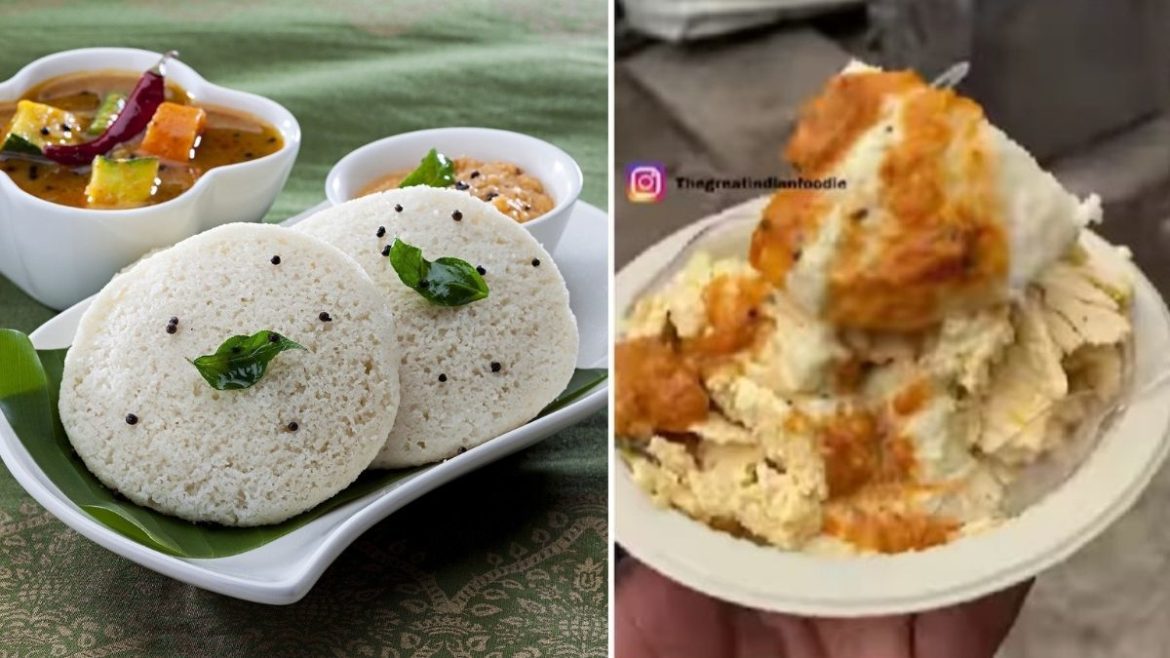 Who doesn’t love ice creams? Literally everyone, from young to old. But people have taken experimentations with ice-creams to unimaginable levels and foodies are not pleased at all. Not too long ago, idli on ice-cream stick had left netizens shocked in Bengaluru. Now, a street vendor from Delhi gives us more reason to cringe by adding idli, sambar, and coconut chutney into scoops of ice cream! A food blogger uploaded a video of a vendor making the bizarre ice cream rolls where he’s seen mashing some idlis with a spoonful of sambar and coconut chutney and then adding scoops of ice cream to the mix.

A video of a Delhi food joint making masala dosa ice-cream rolls was going viral and was enough to piss off the internet. And to all fuel to the fire, another food joint made a momos ice-cream rolls too. Commenting on the video of the weird snack, a user commented, “RIP to ice cream fraternity.”

Masala Dosa is not a dish, it’s an emotion. A crispy layer of fermented rice batter and lentils cradles a comforting filling of cooked potatoes in spices and onions. This is not a snack it’s an entire meal in itself, that finds faans not just in South India but across the nation. So when everyone’s beloved masala dosa gets tampered with, in a food trend, the internet doesn’t stay quiet. In a bizarre move, a Delhi eatery serves Masala Dosa Ice Cream Rolls, leaving baffled foodies asking why!

A video posted by the @thegreatindianfoodie on Instagram shows a street food vendor from Delhi preparing ice cream rolls from masala dosa. In the video, the vendor first slices a masala dosa into pieces and then crushes it. He adds milk and cream and continues crushing the dosa and mixing it with the dairy ingredients on an ice slab. Next, he spreads it across the slab in a thin layer. And then goes on to roll the light yellow coloured ice cream into rolls. Voila! You have your Masala Dosa Ice Cream Rolls that’s savoury ice cream.

Also Read: This Pink Dosa In Delhi Is Pleasing To The Eyes And Soothing On Taste Buds

Also Read: Biryani And Dosa Emerge As India’s Most Ordered Foods In 2021

If you think this is crazy, wait till you know how this dish is plated. The ice cream rolls are placed on the plate and topped with potato masala. Chutney and sambar are poured next to the ice cream rolls to finish the dish. Now, this is a Delhi special Masala Dosa Ice Cream that would leave you questioning its very existence. This video went viral garnering over 16,000 likes. One netizen commented that dosa lovers might get a headache after watching the video. Another wondered how it would taste like, while most netizens asked why! If you’re craving for a good old Masala Dosa sans the tampering, then here are 5 best Dosa places in Mumbai.