I Went Hiking From Rishikesh To Kedarnath Covering 242 Km In 8 Days; Here’s How I Did It 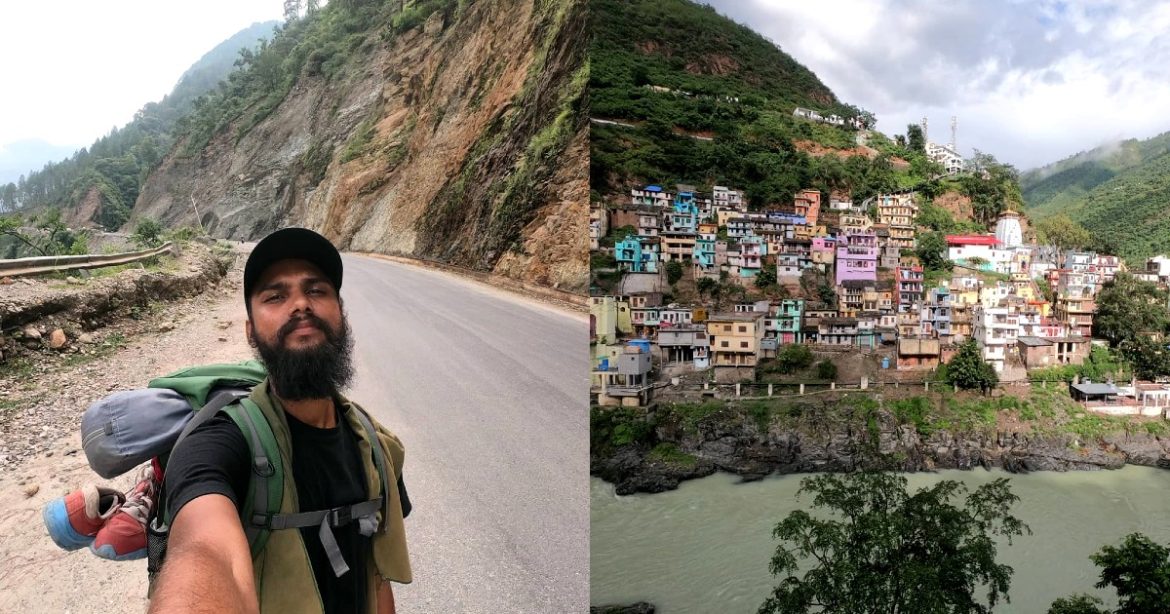 Born in a humble village in northern Rajasthan, I am Raghuveersingh Rathore. You can call me Raghu Raahi. I am a passionate traveller, who loves backpacking to destinations in India and abroad. My friend and I covered the distance from Rishikesh to Kedarnath on foot. We passed through dense forests, rustic villages and majestic mountains. Here’s how we covered 242 km in 8 days to reach the mountains of Kedarnath from Rishikesh.

Inspired By Pandavas We Decided To Walk From Rishikesh To Kedarnath

My friend Bharat and I started the trek to Kedarnath on July 10, 2021 from Laxman Jhula with a backpack, tent and heart full of excitement. We had decided to take the ancient trail for this walk as we wanted to walk in the footsteps of Pandavas and millions of pilgrims after them. Sadly most of the trail is now turned into a Highway but we planned to walk through the part which goes through the forests, mountains, and a few villages covering some 35 km in 2 days. The entire trip was free thanks to well-wishers and travel enthusiasts on Instagram, contributing to my food and stay.

Also Read: This Kerala Temple Is Dedicated To Mahabharata’s Most Hated Character Duryodhana

After a lot of digging, we found some documentation, which we used as our road map and itinerary for this journey. It was published by an organisation named “Been There, Doon That?” who had done complete research on this trail that goes through ancient chattis (a place where pilgrims get some food and rest). My friend and I were fortunate enough to visit, eat and rest at some chattis during our walk. There were a few more chattis ahead. But villagers strongly recommended we not take that trail as a few leopard attacks took place. So we had to take the next jhula (pool) to get to the other side of the river and continue our journey on the Highway.

Also Read: 5 Ventures That Arrange Awesome Solo Trips For Women In India & Across The World

Bharat and I met some really beautiful souls on the journey, some babas, sadhus, Aghoris. Some even walked with us for miles. We got to witness the beauty of the Himalayan mountains and villages, rivers and forests. Our first day itself was full of unexpected adventures. First, we met two Babaji’s who were also walking to Kedarnath, one of them was a 65-year-old man who had been walking barefoot for the last 2 years. As we walked, we came across a waterfall where we all took a bath and a cave where all the pilgrims used to take rest. We were offered lunch at a chatti. We resumed our trek after a short break and crossed the knee-deep Him River and a village on top of a mountain.

Also Read: I Took A Dream Trek To The Valley Of Flowers In Uttarakhand & Here’s Everything About The Route!

While we wanted to rest in the village for the night, the villagers weren’t willing to host us due to the Covid-19 pandemic. They didn’t want to take a risk and we didn’t wish to impose.  Left with no option, very tiredly we started to walk through the pitch-black night. After about 2 hours of continuous walking, we found an open place next to the river Ganga, with a roof and just four pillars where we slept after eating some nuts and something else offered to us by a Babaji. An epic start and equally epic end to the first day of our walk.

Also Read: This Man Trekked Through India’s Ganga For Two Long Years And Here’s What He Found

Bathing In The Freezing Water Of River Ganga

The next day, I got up at dawn to see one of the Babas standing on a rock, taking a bath in the freezing water of the river Ganga. I would have never thought of doing that but when I saw him I wanted to try it too. And then I did. That was one of the most beautiful moments in the entire journey. The second day of the trek was nothing less than a miracle. Both the Babas left us to walk on the Highway as it was getting difficult for them to trek on the mountains.

Then, we found a beautiful trail that led us to a secluded beach on the shores of River Ganga. The same afternoon we had to cross the rubble of rocks caused due to a recent landslide. When we finally reached a village and asked a couple for some water,  they also gave us some food and tea. When we reached the tar road a young boy offered to drop us off at the next village. Later two other men who got to know that we walked all the way from Rishikesh offered to drop us till the trail. At the end of the day, we reached our destination, Bandar Chatti where we stayed for a night after a delicious dinner at the ashram.

Also Read: These 2 Friends Trekked To The Hidden Gems Of Meghalaya During Pandemic & Worked From Mountains

Interacting With An Aghori Baba Who Travelled Across India By Foot

A few hours into the next day, a man offered to drop us off at Devprayag, the Sangam, where we were reunited with the two Babas we met earlier. And the following day one of the Babas re-joined us. That evening, we stayed at a temple in Maletha town, where we met an Aghori baba who lived at the temple for years. He had traveled all across India for 12 years by foot and 6 years by cycle. We cooked dinner in his kitchen and saw him perform his mesmerizing Aarti that night.

Also Read: I Went Backpacking From India To South East Asia By Road With My Friend

It Was Time To Complete The Journey Alone

After 4 days of walking together, Bharat decided to take a bus back to Rishikesh as he was short on time and he wanted to explore the rest of the places before heading back home. I was sad but I understood that this was my time to walk alone. But at that moment I was not sure what to do? I was thinking of going back too. I was still not completely ready to walk on my own. But then I thought about all my friends who had been supporting me all this while through Instagram. Some of them even contributed to the walk. Thinking of quitting now seemed pretty unfair to them. Their support was the only motivation that I decided to keep walking.

Also Read: I Go On Backpacking Trips With My 6-Year-Old Son, And Started Heart & Soil

Walking From Srinagar To Triyoginarayan & Staying In A Kutiya With Snakes

Rest of the days I walked alone. It took me 4 days from Srinagar to reach Triyoginarayan via Rudraprayag – Agastyamuni – Guptkashi – Sonprayag. I met several people on the way, some offered me a ride, some a warm smile but the most moving experience was the time when I stayed with an Aghori Baba in his Kutiya on the 7th day of my walk. The Kutiya I was staying in was pretty basic and very old with some big holes in the walls. Babaji had told me that sometimes snakes come in at night but it’s alright because they don’t harm anyone.

A lot of yatris have stayed here for years and so far nothing unfortunate has happened. After listening to this I could feel fear building up in me, but I had no choice. It was already dark and it was not safe to go out at that time due to the risk of leopards. When I went to my kutiya to sleep, I did hear some strange sounds. I got really scared for some time but I trusted what Babaji had said and calmed myself down. After some time I fell asleep. In the morning I was happy to see myself safe and alive!

Also Read: 5 Most Dangerous Schools In Asia That Can Only Be Reached By Cable Cars & Wild Treks

Since Kedarnath Was Closed I Trekked To Triyugi Narayan Instead

On the last day, when I reached Sonprayag, people informed me that Kedarnath is still not open and people are coming back from Gaurikund. I knew about it before but I was hoping it would open up by the time I reach. I was just 20 km from Kedarnath. So I climbed up to Triyugi Narayan instead. The Holy place where Shiva and Parvati got their Pheras, where the agni kund is still alive. While I couldn’t visit Kedarnath, in my experience, the journey was more memorable than the destination. I made friends along the way, interacted with warm strangers, bathed in river Ganga, shared a kutiya with an Aghori Baba and snakes and trekked in one of the most beautiful places on earth.