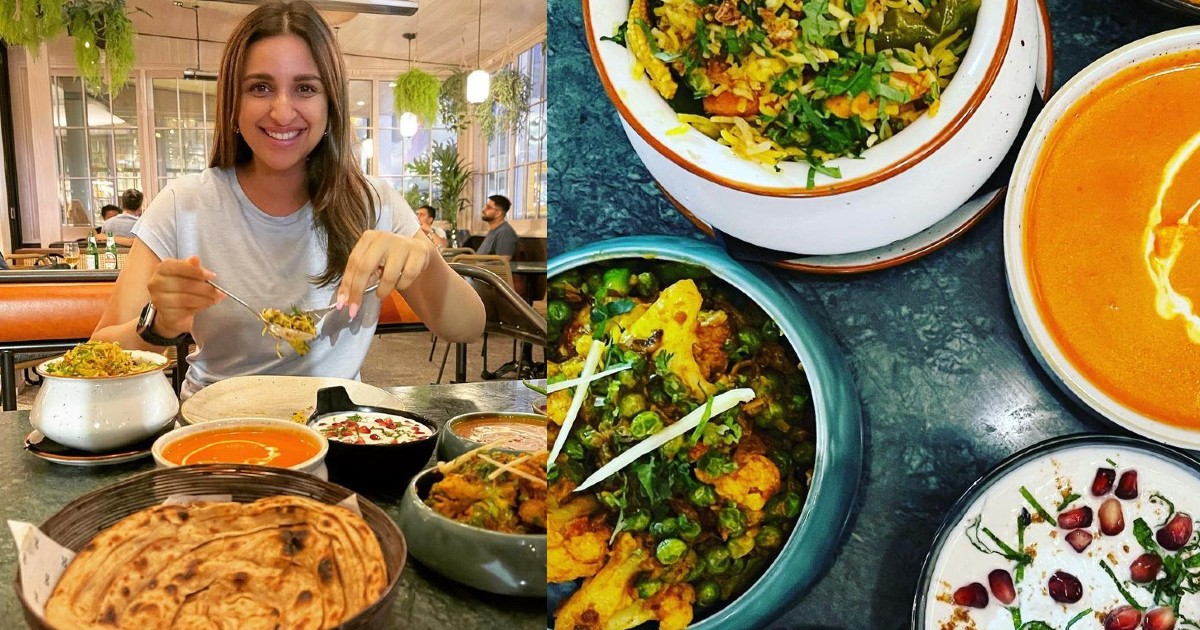 “You realise the importance of anything when you’re away from it.”, says actress Parineeti Chopra while savouring a humble desi meal with dal, roti and rice in London. In a picture posted by her on Instagram, Parineeti is seen gorging on tandoori roti, an Indian curry, dal, spicy rice and raita. Her smiling face and sparkling eyes in the picture unveils her excitement on seeing the food. Expressing her love for the meal, the actress wrote, “I haven’t been to India since March .. And so a simple dal, roti and rice brought tears to my eyes last night. Thank you @copperchimney_uk for making me feel like I was home.”

Whom do we usually hug? The people we love, right? Well, true gastronomes have an equal amount of love for food as well. Take for example Parineeti Chopra. In a picture from Austria, Europe, Parineeti is literally hugging her plate, with a smiling face and closed eyes. The actress has shared the photo on her Instagram handle and captioned it as “e̶a̶t̶ hug your food”. While she looks adorable in the photo, her brother Shivang Chopra has commented on it, “Such pretty food deserves hugs. I too deserve hugs.”

Parineeti Soaks In The Natural Beauty Of Austria

On June 17, 2021, Parineeti had shared another picture of herself on Instagram with the gorgeous natural beauty of Austria in the backdrop, featuring turquoise waters, clear blue sky and echoing green mountains. She had captioned the picture as “Arghhh nature! why so beautiful?” Saif Ali Khan’s sister, jewellery designer Saba Ali Khan Pataudi, replied to her caption, “As ….are you… Beautiful…inside n out. TC.”

Some Days Back, Parineeti Was Holidaying In Turkey

Before Austria, Parineeti was vacationing in Turkey. She had shared a picture, in which she was seating on the sandy beach, enjoying the sunshine. Captioning the picture, she wrote, “I was doing Pranayama before this photo. Ok thats a lie.” Turkey Opens Doors To Non-Vaccinated Travellers From India; Mandatory Quarantine For 14 Days

Meanwhile, in an Ask Me Anything session, Parineeti’s fans had asked her where she exactly was. The actress had replied, stating that she wanted to answer the question as most people are not able to travel from India. She said, “I have been outside the country since March. I am lucky enough to be able to be travel freely in these difficult times. And I am not taking this blessing for granted.”