The government of Gujarat launched a seaplane service to provide connectivity from Ahmedabad’s Sabarmati Riverfront to Kevadia’s Statue of Unity. This was the first-of-its-kind service in the country. A 19-seater seaplane to be used for flights arrived in India from the Maldives last year. The ticket per person on this seaplane was ₹4,800. But due to the COvid second wave the Ahmedabad-Kevadia seaplane service was suspended from April 9 and will remain suspended until September in the account of the monsoon season. The operator SpiceJet decided to stay grounded during the monsoon and also assess the situation of a possible Covid third wave.

Seaplane Launched In Gujarat On October 31

A seaplane service came up between Gujarat’s Sabarmati Riverfront and Statue of Unity. According to Financial Express, the service will begin on October 31. The Twin Otter 300 seaplane of SpiceJet can accommodate up to 12 passengers. On October 25, it arrived in India from the Maldives and made a successful landing inside Kochi’s Venduruthy channel for transit halt. The aircraft will reach Ahmedabad soon, from where regular flying operations will commence.

#WATCH Gujarat: Twin Otter 300 seaplane of Spicejet Technic that took off from Maldives arrives at Kevadia Colony in Narmada.

It's scheduled to fly to Ahmedabad where it'll commence flying as a part of regional connectivity scheme between Sabarmati riverfront & Statue of Unity pic.twitter.com/WTZB4APpEq

According to DNA India reports, the Gujarat Government said in a press release, “The first-ever seaplane services in Gujarat will provide seamless and affordable air connectivity from Sabarmati Riverfront, Ahmedabad to the Statue of Unity, Kevadia.’’ The report also states that the ticket per person will be around  ₹4,800. The seaplane will cut down the travel time between Ahmedabad and Kevadia by about three hours. At present, a journey from Ahmedabad to Kevadia takes nearly four hours. The seaplane will cut down this travel time to just around one hour. 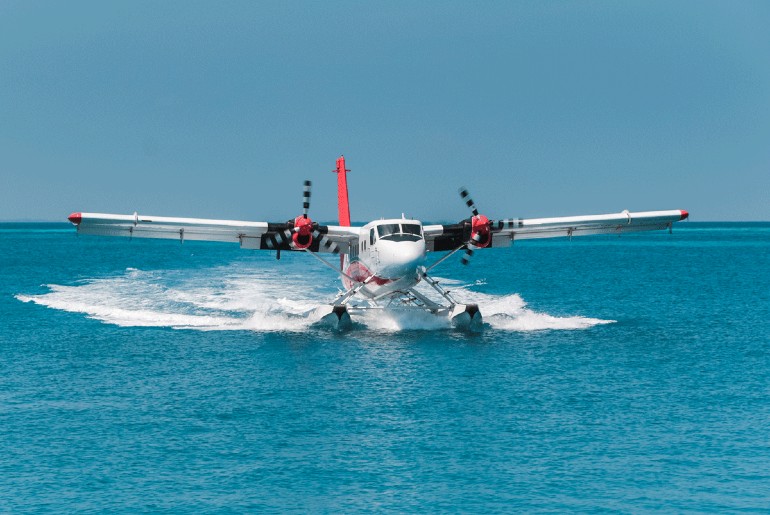 We can’t wait to board the seaplane to fly above the vast waterway of Gujarat! Meanwhile, here’s an air tour in a seaplane over UAE’s iconic wonders: