Japan’s Wisteria Tunnels Are More Magical Than Its Cherry Blossoms 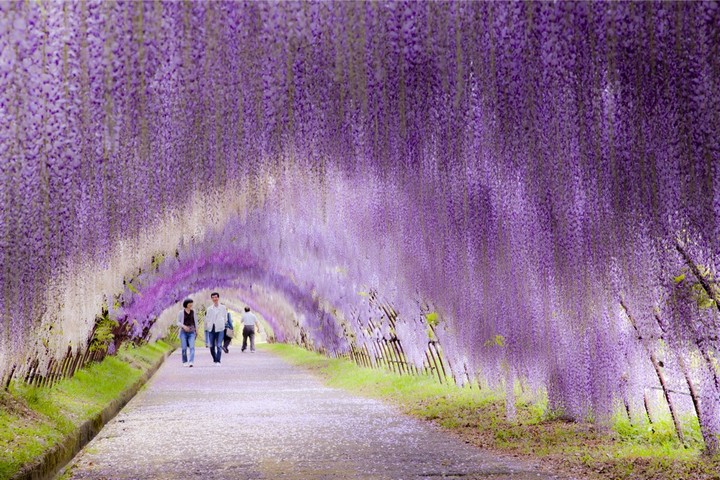 Japan its popular for its nature parks and cherry blossom. Every spring, Japan welcomes thousands of travellers from around the world who visit the country to witness the country’s cherry blossoms, but the season also brings several other stunning blooms to admire. So, if you are thinking of that one destination to visit after the pandemic, Japan should totally be on your list. 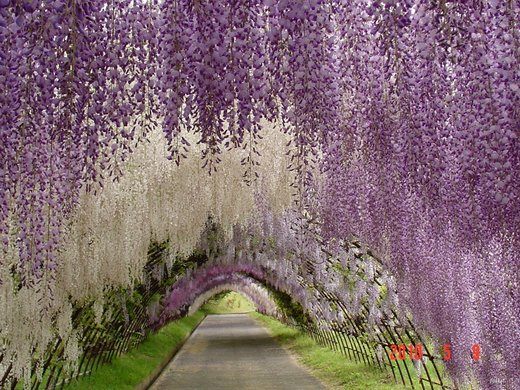 Every year Japan sees the blossoming of the beautiful Wisteria, also known as ‘Fiji’ in Japan. It is Japan’s second favorite flower, known to turn into large tunnels due to their ability to bend. These Remote Japanese Villages Look Like They Are Straight Out Of A Novel 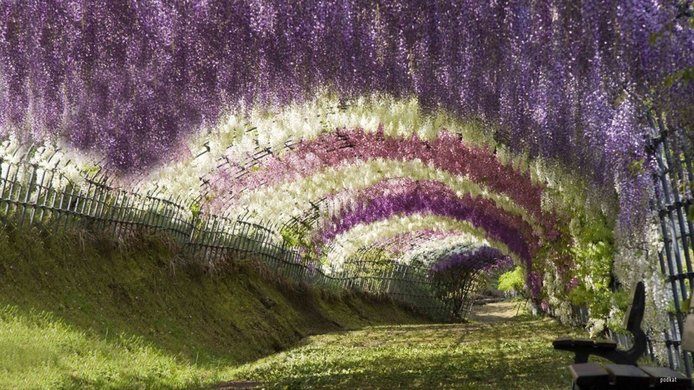 Wisterias typically bloom around late April and early May, with slight variations depending on the type of wisteria in bloom. You can also Have Your Own DDLJ Moment In Sunflower Fields Of Karnataka&#8217;s Gundlupet. 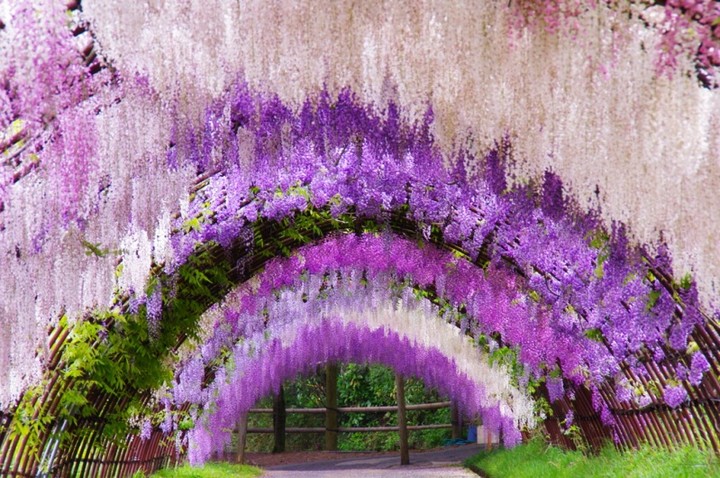 The perfect place to catch the Wisterias in full bloom is the Ashikaga Flower Park. It has a Kibana Wisteria Tunnel where visitors can take a stroll underneath and click beautiful pictures to brighten their Insta-feed.Here are Tips To Safely Visit A Park During A Pandemic.

It is home to over 350 kinds of Wisteria trees ranging from light violets to pink, purple, whites and yellow.  Also, Visit The Cup Noodles Museum In Osaka, Japan. 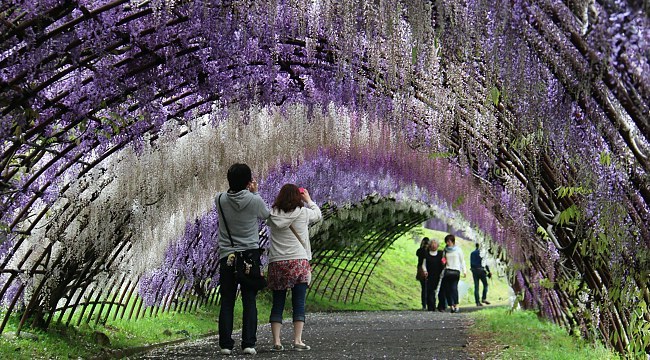 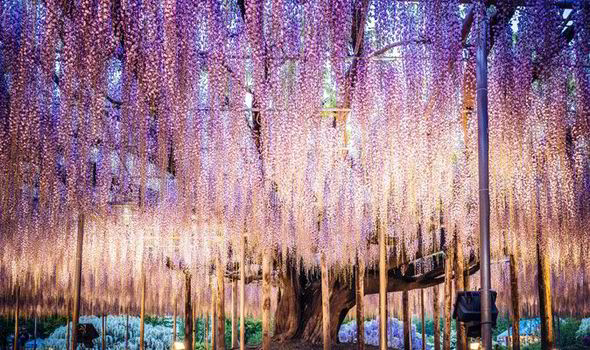 The park also has a 150-year-old wisteria tree and more than 5,000 azalea bushes that can be admired around the same time. 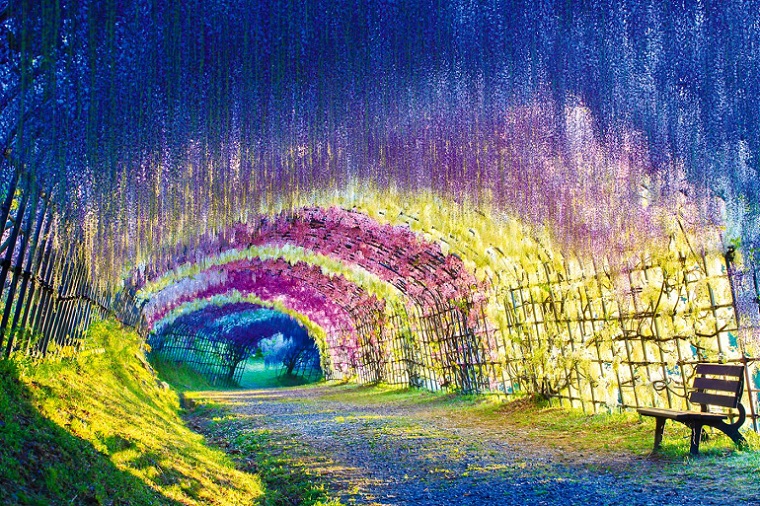 The best time to visit is between April 13th to May 19th when the Wisteria festival is in full swing. Between the time visitors can also check out the Wisterias lit up during the evening and sample wisteria themed soft serves and goodies. Japan Launches New Bullet Train That Rescues Passengers During An Earthquake. 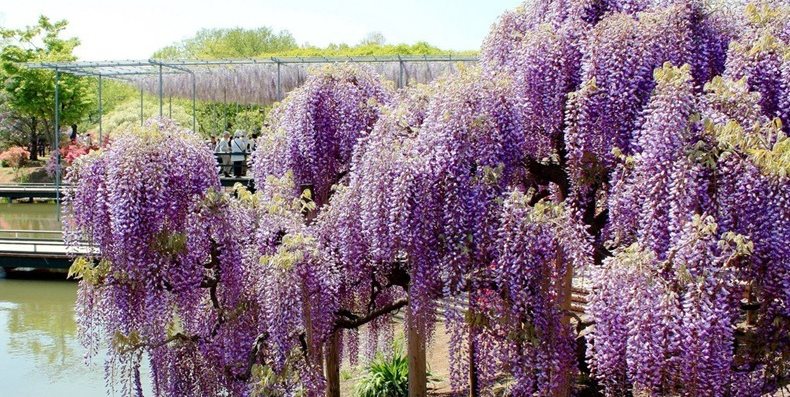 Another popular Wisteria tunnel is at the Kawachi Wisteria Garden which has around 22 different kinds of Wisteria plants. It has two tunnels that meet to form a large dome of mesmerizing colours. 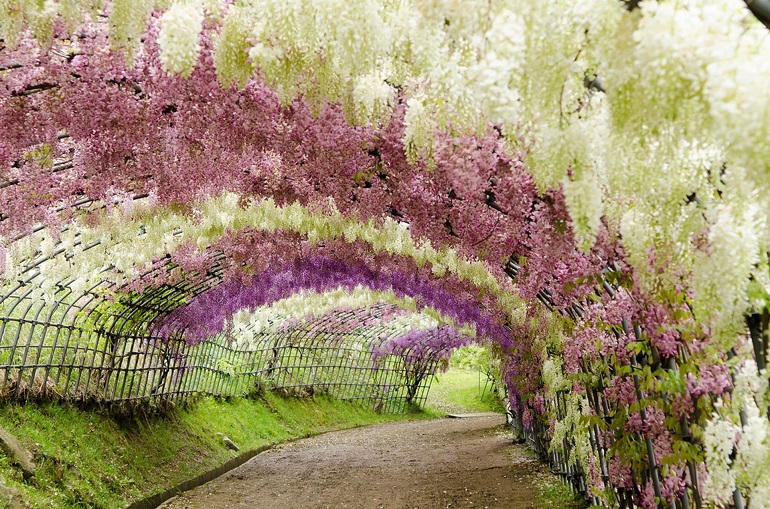 Even the country’s temples and shrines showcases colorful displays in the spring.

The Kameido Tenjin Shrine is the best place for Westeria viewing with lavender colored wisterias hanging in bunches overlooking a pond.