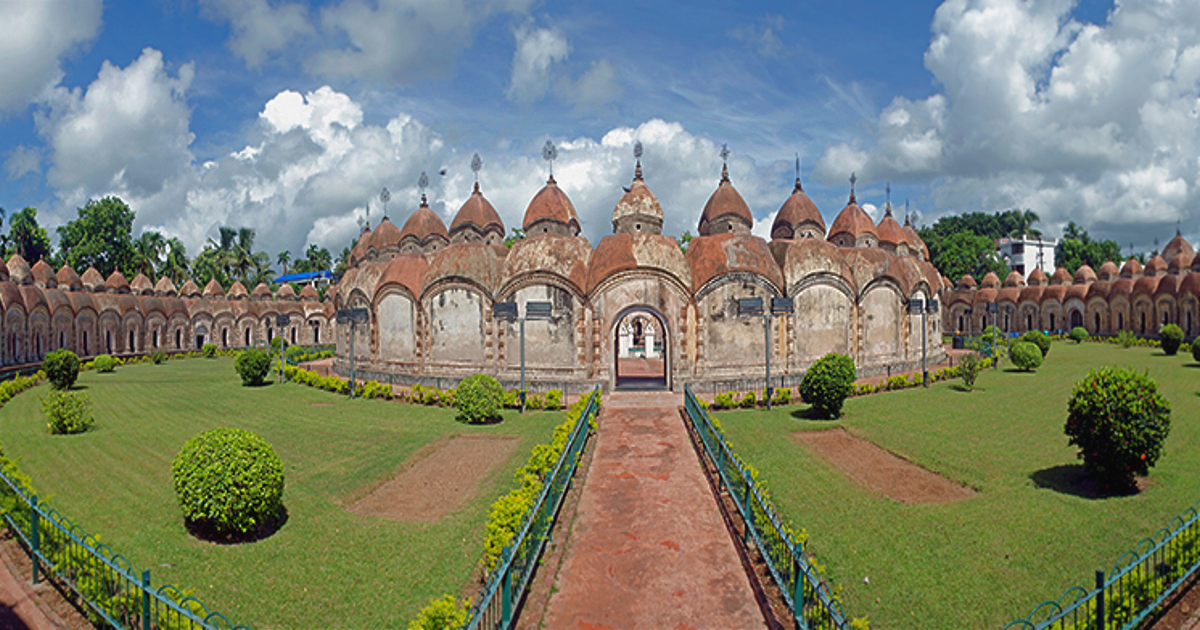 Ambika Kalna in West Bengal’s Purba Bardhaman district is renowned for its historic terracotta temples that date back to the 18th century. The architectures in this town match the charm and splendour of Temple city of West Bengal, Bishnupur. The town, named after Goddess Kali, is also known as Kalna and it is located on the banks of Bhagirathi river. The earliest mention of Ambika Kalna was in a 6th-century text when it was a significant centre for maritime trade. The town attained supreme glory during the reign of Maharajas of Bardhaman in the 18th century. The Bardhaman rulers had built a large number of temples with intricate works of terracotta. 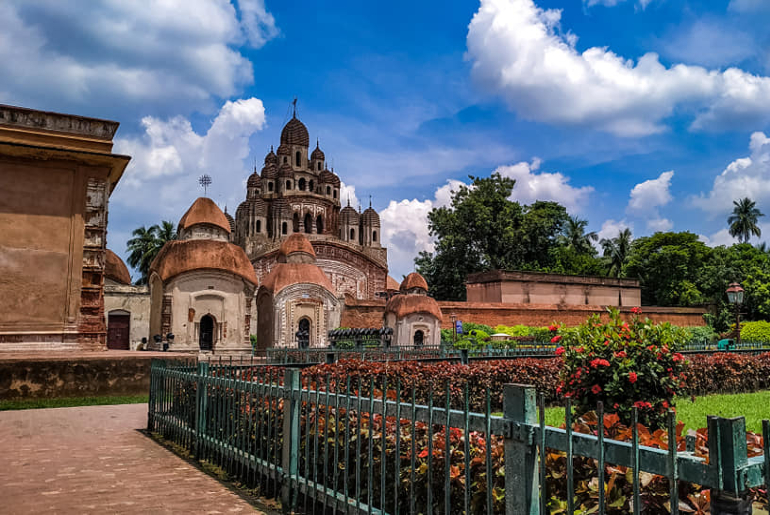 Captivating History Of The Town

Ambika Kalna got its name after a form of Goddess Kali, Maa Ambika. The town has many ancient monuments. The most prominent among them are the Rajbari and the 108 Shiva temples. According to the founder of the Archaeological Survey of India, General Alexander Cunningham, Ambika Kalna was a frontier city of the Tamralipta empire in the 7th century A.D. Kalna is home to the only Chaitanya temple built during Sri Chaitanya’s lifetime. It reached the zenith of its grandeur under the patronage of the Bardhaman Maharajas. The most riveting shrine complex in Kalna is the Nava Kailash or the 108 Shiva temples. Maharaja Tejachandra had supervised the construction of the temple complex. The walls of the temple have splendid terracotta work, depicting episodes from the Ramayana, the Mahabharata and some hunting and erotica scenes. 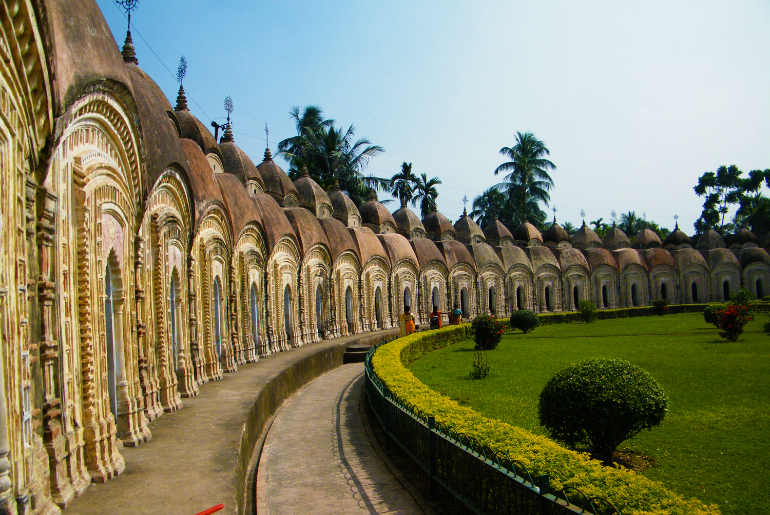 The complex was constructed in 1809. The temples at this place are arranged in two circles. The bigger circle consists of 74 temples and the smaller one has 34. Temples of the first circle comprises white marble and black stone shiva lingas. The inner circle has only white marble ones. The stunning aspect of this temple is that all the shiva lingas can be viewed from the centre of the complex. 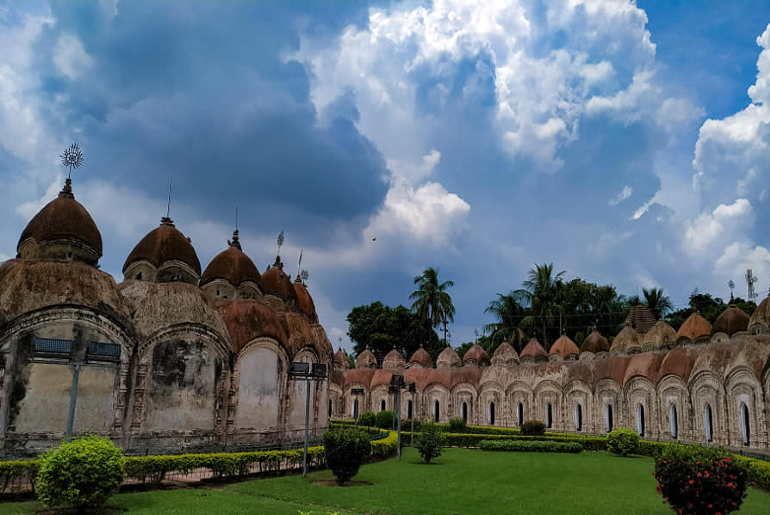 Also Read: Orchha’s Ram Raja Temple Is The Only Temple In India Which Worships Lord Ram Like A King

Apart from the 108 shiva temple complex, there are many other gorgeous places to visit in Kalna. The Sri Gauranga Mandir, near the temple of Debi Bhabani, houses Sri Chaitanya’s manuscripts and personal belongings. The Siddheshwari Temple, dedicated to Ma Ambika, is approximately 800 years old. The Krishna Chandra Mandir has 25 steeples and scenes from the epics are pictured on its terracotta surfaces. The Lalji Mandir too has 25 steeples. 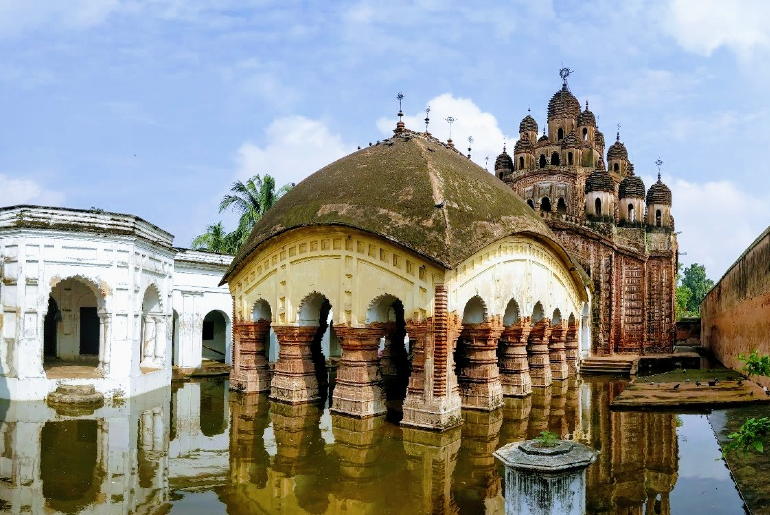 The Pratapeshvara mandir, designed in the Rekha style, is another example of spectacular terracotta architecture. Projapoti Bari ( meaning Butterfly house) has a magnificent butterfly emblem on top. Buddha Mandir nestled at Bara-Mitra-Para it is the oldest Buddhist temple in Purba Bardhaman district. Other attractions of the town include the Gopalbari Mandir, the Anantabasudev Mandir and the striking edifices of the aristocratic Bengalis. 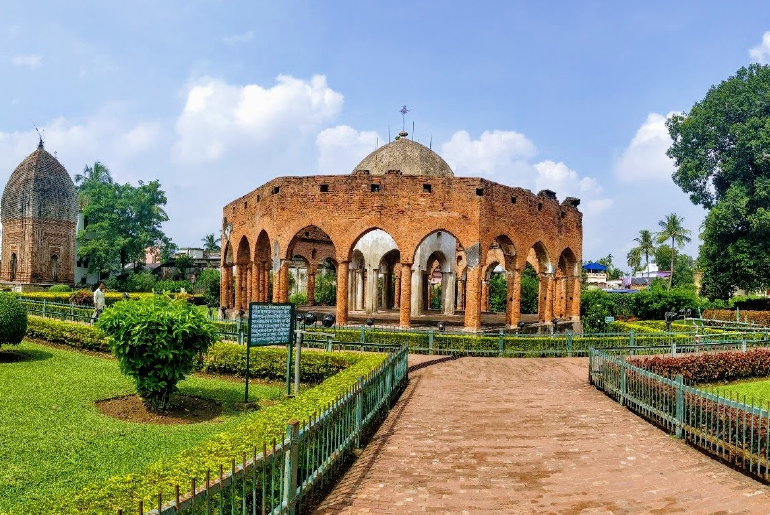 Every winter, in the second week of January, the Kalna Porjoton Utsav takes place. The Rajbari gets beautifully decked up during this celebration. Ras Manch becomes the main attraction in the evening. The festival witnesses folk dances, songs and other performances by the local tribes. 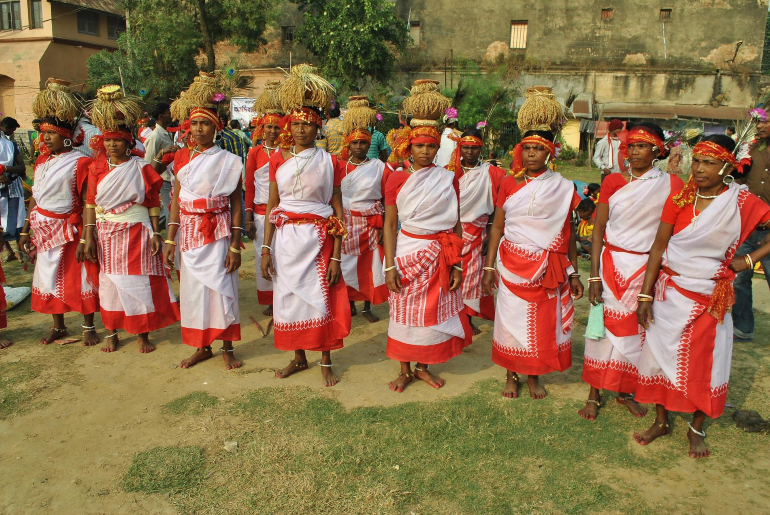 People of Kalna celebrate Saraswati puja in a gala way and the celebrations draw visitors from all parts West Bengal. The huge themed pandals, the sparkling array of artistic lights, the beautiful idols of Goddess Saraswati will easily remind one about the Durga puja of Kolkata. Another important Kalna festival is the Mahishmardini Puja, which lasts for 4 days. During this festival, a fair takes place covering almost fifty percent of the entire town. The fair has multiple attractions like toy train rides, merry-go-rounds, magic shows, puppet shows and many more.

However, due to the current scenario, there is a very high possibility that you may not be able to attend any this year. 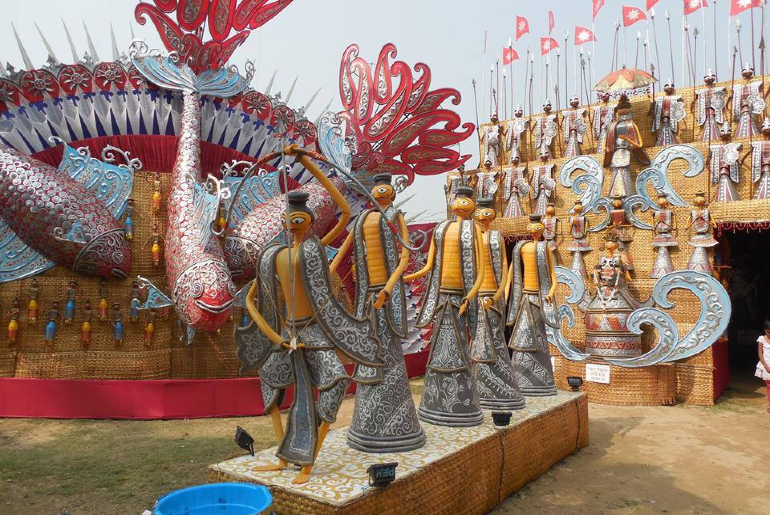 Kalna is a well-known production hub in Bengal handloom industry. The artisans of Kalna and Katwa of the Bardhraman district weave outstanding Tangail and Jamdani saris. They also design scarves, nylon shirtings and home furnishings for export. The town also houses a good number of rice mills. 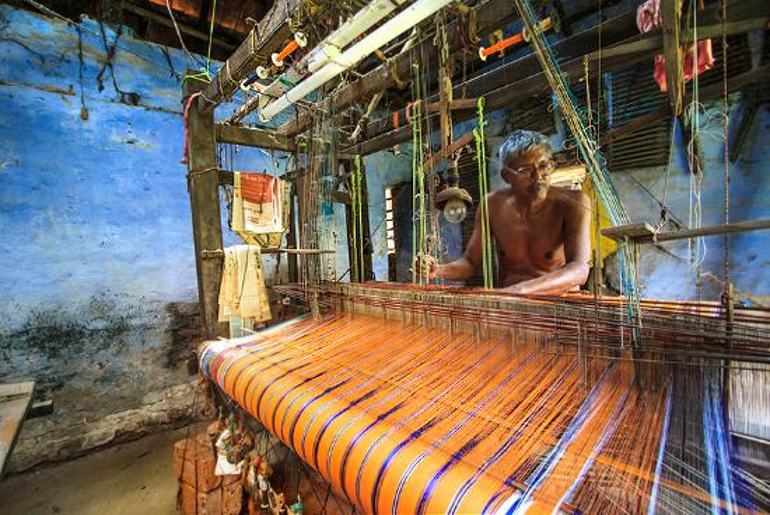 When To Visit And What To Eat

The ideal time to visit Ambika Kalna is from October to February when the temperatures remain cool to comfortably warm. Also, you can stay at various Dharamshalas in Kalna instead of the hotels and enjoy the delectable Bengali cuisine of Burdwan. Don’t forget to try out the sweet options like sitabhog, mihidana, lengcha, shor bhaja and kheer kodom. And if you’re a non-veg, you must definitely gorge on the soothing macher jhol and macher malai ( fish curry and fish malai). 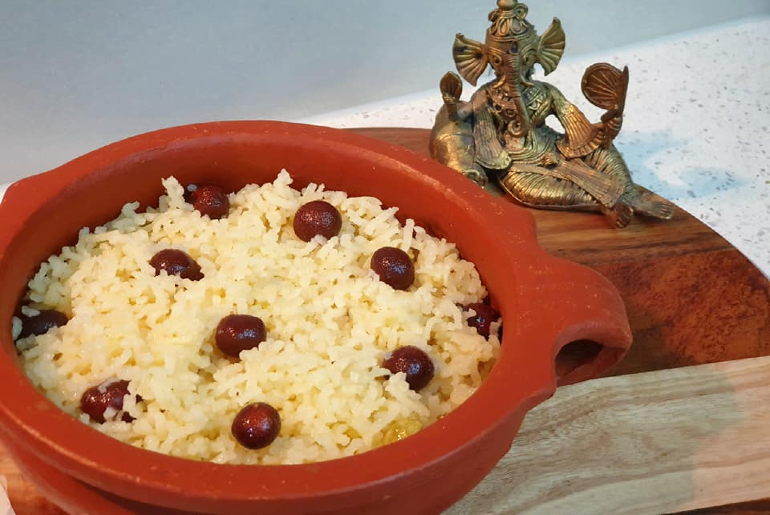 Ambika Kalna is only 3 hours away from the city of joy Kolkata. Thus, a visit to Kalna can be an extension of your Kolkata trip. For now, let’s take y’all on an amazing virtual tour of the city: