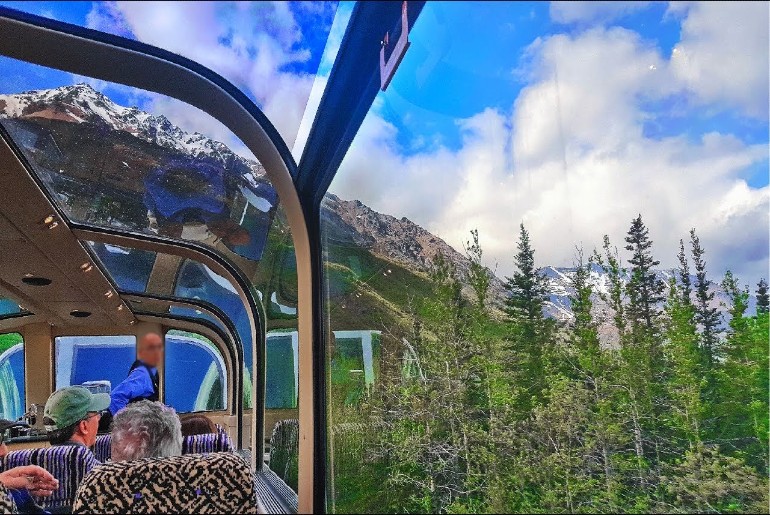 Train journeys are undoubtedly some of the most memorable and awaited journeys of our lives. The breathtaking views of the lush vegetation, charming countryside, green paddy fields and lofty hills are what makes it so special. To amp up your train journeys, Vistadome coaches brought in the blend of luxury and unending 360-degree views to your train experience. So, here are 7 destinations in India you can travel to in Vistadome coaches.

Travel to one of India’s most underrated beach destinations, Mangaluru in Karnataka. Hop on a Vistadome coach from Yesvanthpur Junction in Bengaluru and commute along the Bengaluru-Mangaluru stretch in swanky coaches. The large windows and glass panels ensure you savour every bit of the stunning views of the Western Ghats. As you head along the Sakleshpur-Subrahmanya Ghat section, the mountain valleys, gorges and greenery will take your breath away. Book a ticket for around ₹1500 per head. Instead of driving down or flying to Mangaluru, take a luxurious train journey to this beach destination.

A Vistadome train runs between Assam’s Guwahati and Arunachal Pradesh’s Naharlagun. With rotating chairs, glass ceilings and large windows you can enjoy unending views of lush tea gardens, pretty hamlets and deep valleys as you travel to Naharlagun. Travel a distance of 343 kilometres in this plush train as you create memories for a lifetime. Naharlagun is a charming town that’s perched in the foothills of the Himalayas. You’d be guaranteed pleasant weather and panaromic views at this hilly destination.

Also Read: Manipur To Get World’s Highest Railway Bridge Pier; To Be Taller Than Bridge In Europe

A post shared by by Ritu & Dilip | INDIA (@bharatblog)

Also Read: The Kalka-Shimla Train Takes You On the World’s Most Scenic Trail Across 15 Stations For ₹500

The Indian Railways launched a luxurious Vistadome coach on the scenic New Jalpaiguri-Alipurduar route in North Bengal. The coach has large windows, transparent ceiling to offer breathtaking views of tea orchards, green forests and rivers of the Dooars region that lie on the route. The cost per seat is ₹770 per person t travel 169 km. The train takes halts at Siliguri, Chalsa and Hasimara to name a few destinations. The final destination is Alipurduar, the gateway to Bhutan and the North East. The Vistadome train halts at Sivok and Hasimara stations, where passengers can visit selfie points and be part of tea tastings.

Vistadome Express takes you from Naharlagun in Arunachal Pradesh to Tinsukia in Assam. The Naharlagun-Tinsukia Vistadome Express runs five days a week. The state of the art Visatdome coaches offers passengers total travel comfort and an enhanced viewing experience. The wide transparent windows, glass rooftops and 180-degree rotatable seats ensure they savour unending tea garden views and lush greenery as they commute through the stunning landscapes of the North East. The industrial district of Assam, Tinsukia is one of the state’s premier commercial centres.

The Mumbai-Pune Express special train has a Vistadome coach to ensure you enjoy unending views. Passengers on this route can experience the scenic beauty of the Matheran hill, the Ulhas River, waterfalls and tunnels of the South East Ghat section and the hilly destinations of Khandala and Lonavala. The air-conditioned Vistadome coaches with glass panels on the roof and large windows offer unhindered views of the waterfalls and much more on the Mumbai-Pune route. Instead of travelling by air or bus, head to Pune from Mumbai on a Vistadome coach.

While road trips to Mumbai and Goa are much-awaited thanks to Dil Chahta Hai, we suggest you embark on a unique train journey with Vistadome Coaches. hop on the Dadar-Madgaon Jan Shatabdi Express that runs all seven days and savour breathtaking scenic views of the Konkan coast and the Western Ghats. The glass-roofed AC coaches ensure you have a luxurious travel experience as your eyes soak in the glorious beauty of coconut groves and charming hamlets.

So, these are 7 destinations you can visit in Vistadome coaches that promise some of the best landscape views you’d have ever imagined. Get a window seat, listen to music and let your eyes explore the mountains, greenery, ghats paddy fields and more.