A Fruit Vendor’s Son Started…
How Noida Rebranded Itself Into…
This Nature-Themed Cafe In Guwahati…
KFC Japan Buffet With Pizza,… 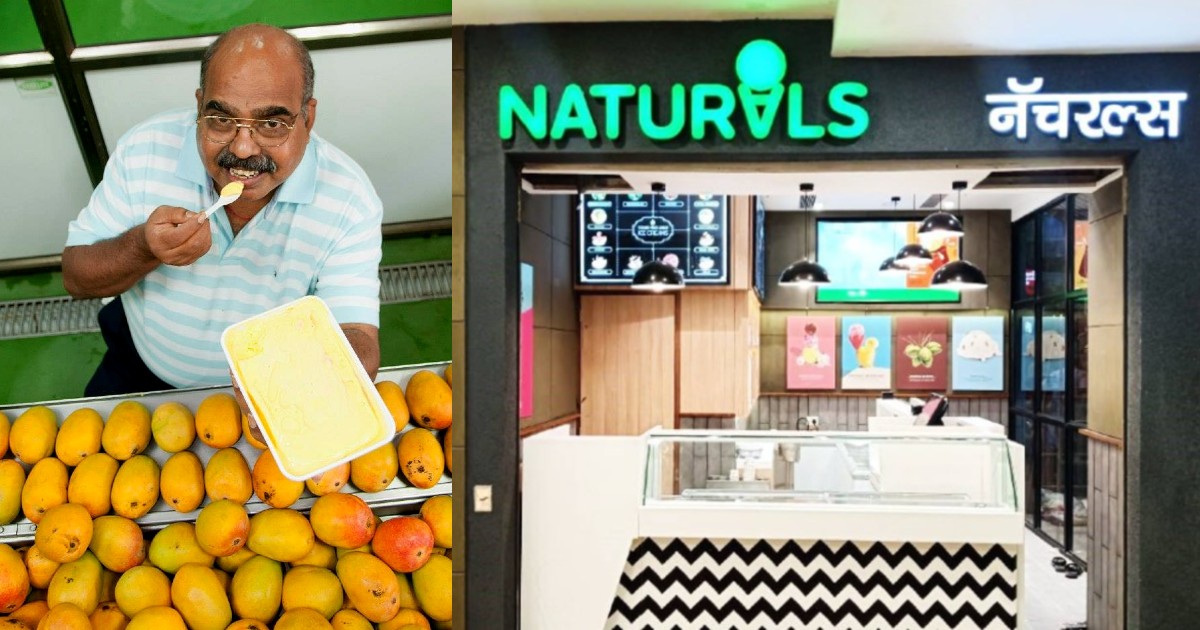 A box of Sithaphal Naturals Ice Cream lies in my freezer right now as I sit down with eagerness to pen down the story of India’s most successful ice cream parlour, Naturals. Offering 20 flavours at a time at 135 outlets across India, recording a turnover of ₹300 crores in the financial year 2020, Naturals has been named as India’s Top 10 brand for customer experience in a KPMG survey. So you’d guess by now, that it’s not just me but thousands of Indians who adore their fresh fruit ice creams, all thanks to Mulky Raghunandan Srinivas Kamath, the entrepreneur who helmed this, all the way back in 1984. A fruit vendor’s son from the tiny village in Mulki in Karnataka is today the proud Founder Director of a ₹300 crore ice cream empire. So how did our favourite ice cream parlour Naturals come into being? Well, read on to find out more.

Raghunandan Kamath Hails From A Humble Family In Karnataka

Raghunandan Srinivas Kamath hails from Mulki in the Puttur taluka of Mangalore. The youngest of seven siblings, his father was a fruit vendor and his mother, a homemaker. Raghunandan’s father earned just around ₹100 a month from leasing his trees and selling fruit. Neither his meagre income nor the rice and veggies grown on the patch of family-owned land was sufficient to feed the family. According to The Better India, the children couldn’t afford to wear clothes and would roam around bare-bodied, under the pretext that they were yet to take on a bath and wear fresh clothes. Having curry was a luxury. Jackfruit plucked from trees and coffee with jaggery was all family could afford to eat as snacks. 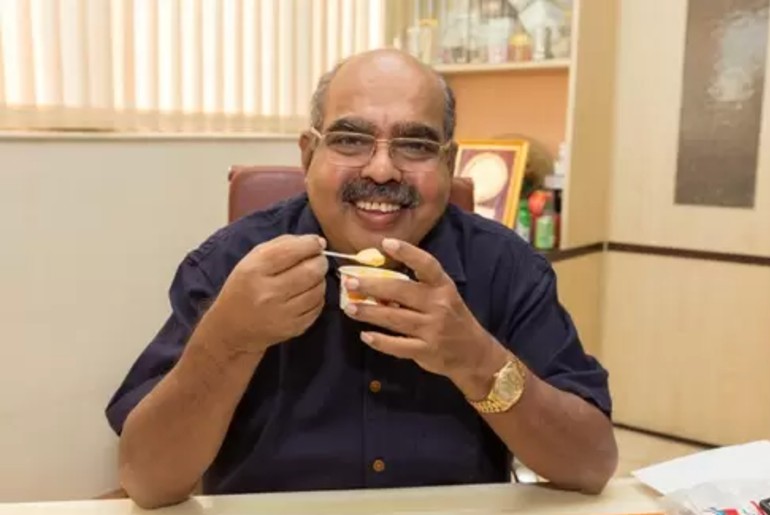 Raghunandan studied in a village school with all students from classes 1 to 5. But it was the lessons outside school that interested him the most. He often accompanied his father to pluck fruits and sell them in the market. During this time, Raghunandan learnt to spot high quality, ripe fruits. Watching ripe fruits hanging from the branches fascinated him. His childhood experiences with his father helped him gain knowledge of fruits, their quality, storage and ripeness. 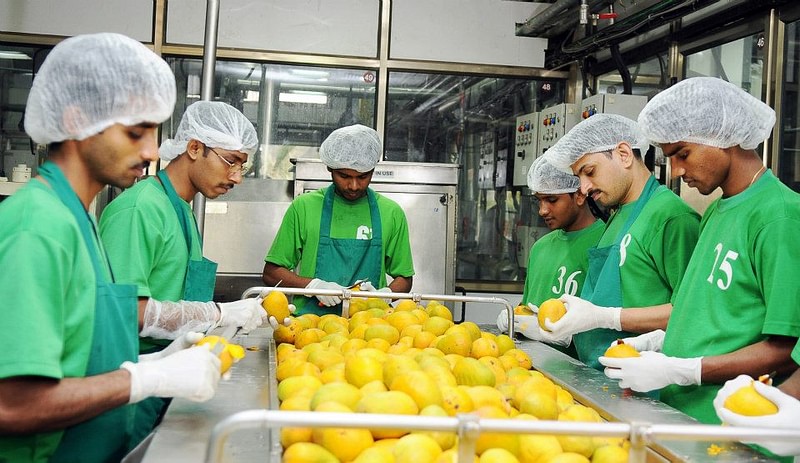 Back at home, with no TV or any such form of internet, he hoovered around his mother and curiously watched her cook meals using traditional techniques. Right from peeling fruits and vegetables, using spices and gently cooking them on the stove, he watched her every move like a hawk. Little did he know that his childhood learnings from his fruit vendor father and his resourceful homemaker mother would help him build a multi-crore business.

At the age of 14, after failing to clear his boards twice, Raghunandan shifted to Mumbai. He was asked to join his eldest brother, who ran a South Indian, Udupi-style eatery, named ‘Gokul Refreshments’. While his eldest brother sold delicious South Indian dishes, Raghunandan was instructed to sell homemade ice cream. That’s when he noticed customers thoroughly enjoying ice creams after a meal. Raghunandan wanted to surprise his customers with an unusual variety of ice creams made with real fruit pulp. 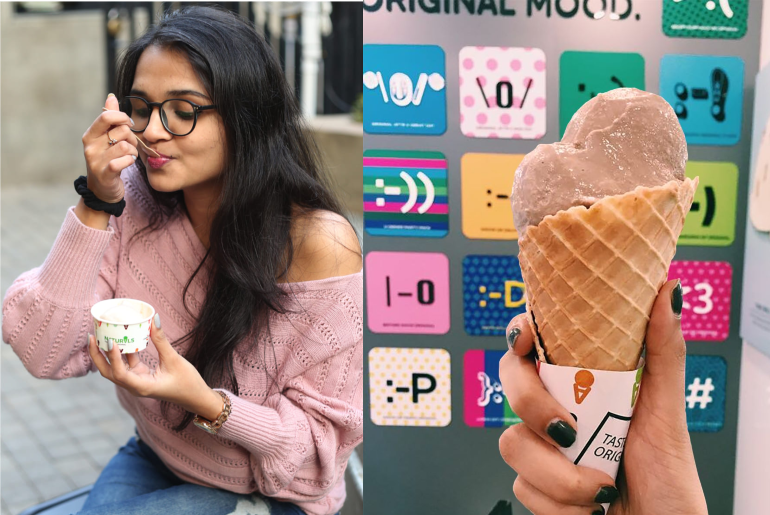 But nobody took this business idea seriously. So he decided to wait for the right time and opportunity. A few years later when his brother offered him a share in the family inheritance, Raghunandan asked for a one-time sum of 1 lakh rupees instead of monthly payouts. He had a big plan in mind and it was a delicious one too. 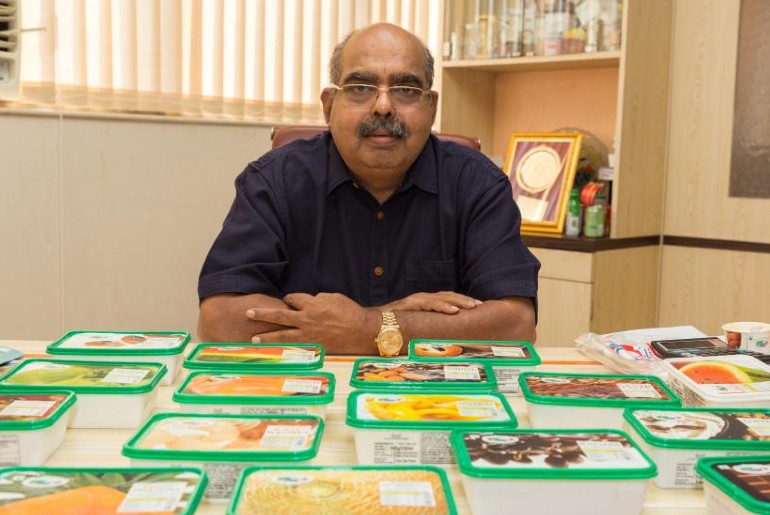 Why Can’t Ice Creams Be Made From Real Fruits?

According to The Telegraph, Raghunandan had a simple question in mind that completely transformed the way India ate ice creams. He wondered “If ice cream can have fruit flavours, why can’t it have real fruits instead?” This simple thought led him to open his own ice cream parlour. At that time ice creams were a luxury that only affluent families would devour. Mumbai didn’t have any standalone ice cream parlours. But the yearning to sell ice creams made from fresh fruit pulp away from the artificial, cliche flavours like chocolate, strawberry and butterscotch, urged him to take a step towards his dreams. 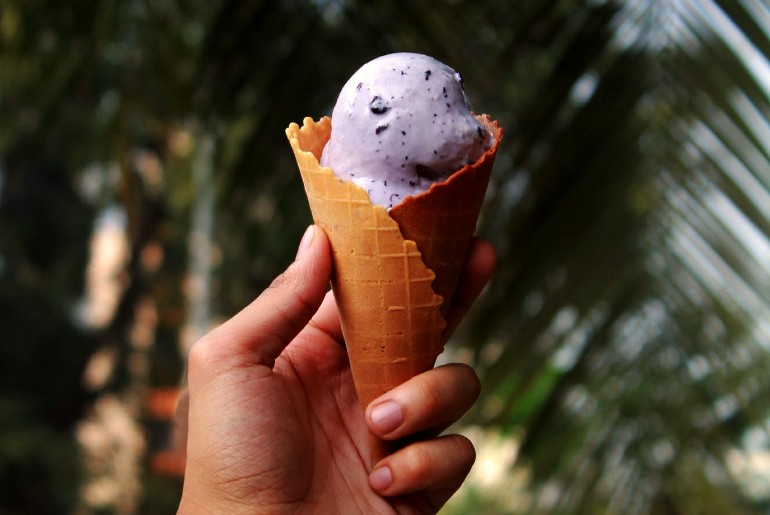 The newly married Raghunandan, in his thirties, used the 1 lakh rupees from his family inheritance and raised another 3 lakh rupees from his friends and family. With the able support of his wife, Annapurna he launched Naturals in 1984 in Juhu. A name that truly was a gut feeling, Naturals, saw the light of day. Initially, Naturals offered 5 flavours- Sitaphal(custard apple), Kaju-Draksh( cashew-raisin), mango, strawberry and chocolate. 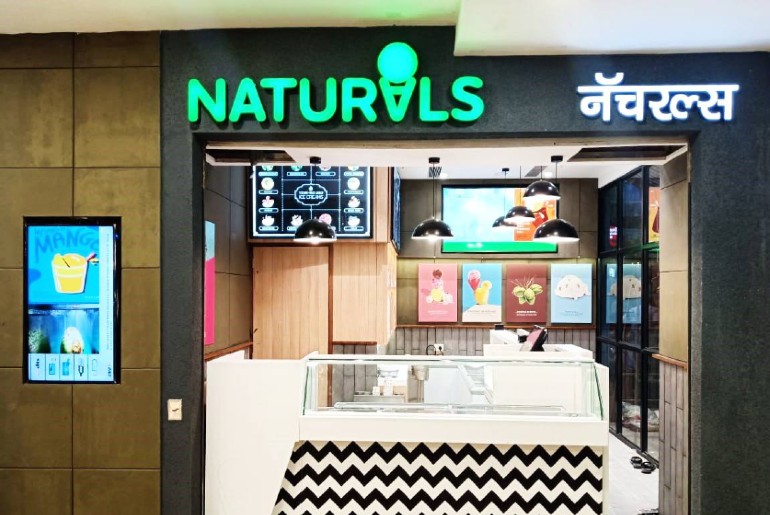 Made with just 3 ingredients, fresh fruits, milk and sugar, there were no artificial flavours, colours or preservatives used. To hedge his risks, he initially sold ice creams with Pav Bhaji. He felt that people would want to eat ice creams after a spicy, hot meal. Later on, he scrapped off Pav Bhaji to single-handedly focus only on his artisanal fresh fruit ice creams. 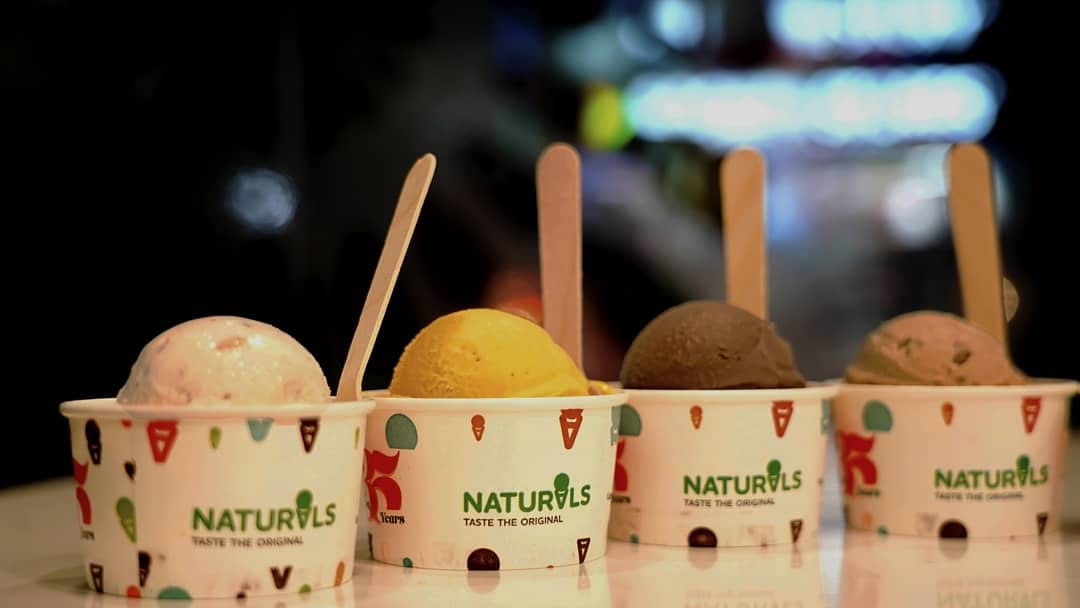 Also Read: 5 Rainbow Coloured Desserts In India That Can Instantly Cheer Up Your Soul

The 400-square-foot store with 6 employees witnessed scores of customers walking in for a cup of delicious ice cream. Raghunandan introduced Mumbai to its first-ever exclusive ice cream parlour. While some preferred to sit in their cars and enjoy their post-meal dessert, others occupied the 6 tables in the verandah. Word got around the posh neighbourhood of Juhu about a new, hot and happening ice cream parlour in town. According to  Intelligent Fanatics Of India, soon, Bollywood celebrities like Raj Kapoor, Jaya Bachchan, Shabana Azmi and Dimple Kapadia flocked in. The entire cast and crew of the Aamir Khan-Pooja Bhatt starrer Dil Hai Ki Maanta Nahi were photographed at the Naturals parlour. 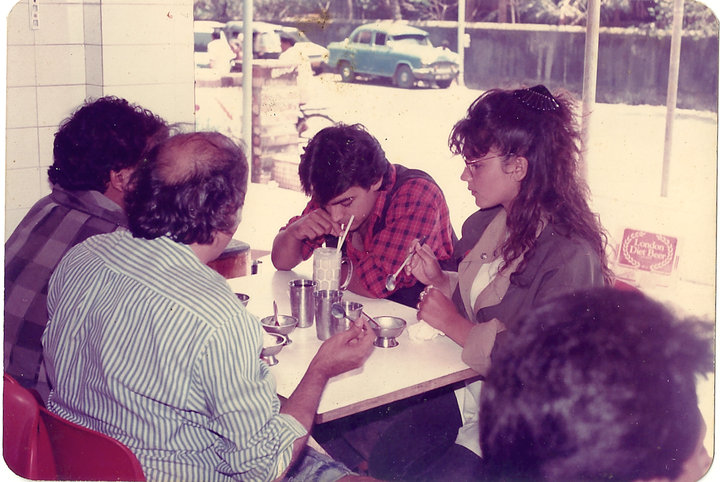 Also Read: As ZNMD Completes 10 Years, Here Are The Best Bollywood Films That Have Inspired Us

Through the well-read and well-travelled customers, Raghunandan received insightful tips and suggestions. They recommended flavours and ways he could improve his business. He found their suggestions really helpful for growing his business. Over the years, Raghunandan has created 100 different flavours of ice creams. He created a cucumber flavoured ice cream inspired by the traditional Konkani dish Thoushe Muddo ( Cucumber Idli). The Cucumber Ice cream made of sweetened cucumber pulp, sugar syrup and milk was filled with julienned cucumber. This won him a gold medal in the Great Indian ice cream contest for the most innovative ice cream. Unfortunately, he calls it an art film, that received awards, but didn’t get much recognition, as customers were sceptical to try an ice cream made of a vegetable. 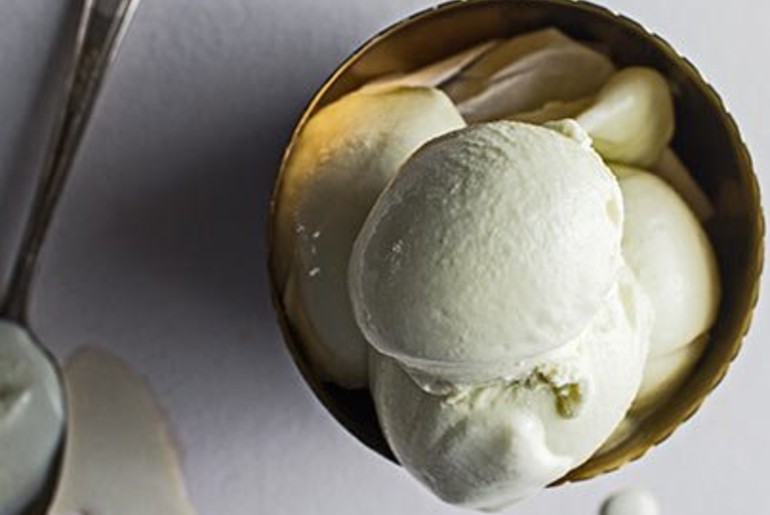 Naturals Ice Cream comes from a household concept of resourcefully using minimum ingredients to create maximum flavour. He wanted to create an entirely different type of ice cream purely made from natural ingredients, and that’s how he continues to stand out from the crowd. Raghunandan thanks his father for teaching him everything he knows about fruits. And he credits his mother for inculcating the value of patience and quality of food through her cooking. In fact, he also built a machine to deseed fruits like jackfruit and sitaphal thanks to her teachings. Today, this unique machine helps the company to prepare 1 tonne of their bestselling Sithaphal ice cream every day. 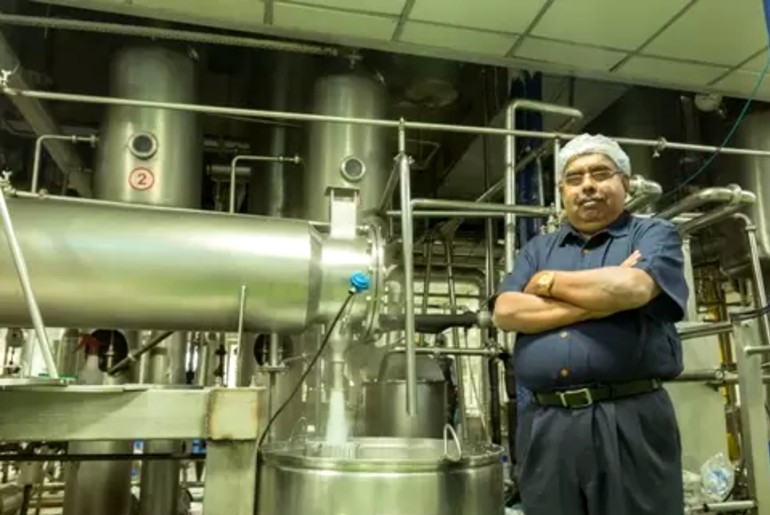 Naturals Ice Cream has invented unconventional flavours like Gajar Halwa, Litchis, Chikoo, Black Grapes, Figs, Watermelon, Guava, Kala Jamun and Prasadam( Food consumed in temples). They are currently experimenting with an Erole Ice Cream.  With a retail turnover of ₹300 crores, Naturals Ice Cream is a leading ice cream brand, that introduced India to 100 per cent natural fresh fruit ice creams.  Started by a fruit vendor’s son, devouring a Naturals Ice Cream is like gorging on fresh fruits with a creamy twist. As I finish writing this article, I’m already planning on getting my favourite Tender Coconut Naturals Ice Cream, and I guess I’ve read your mind too!