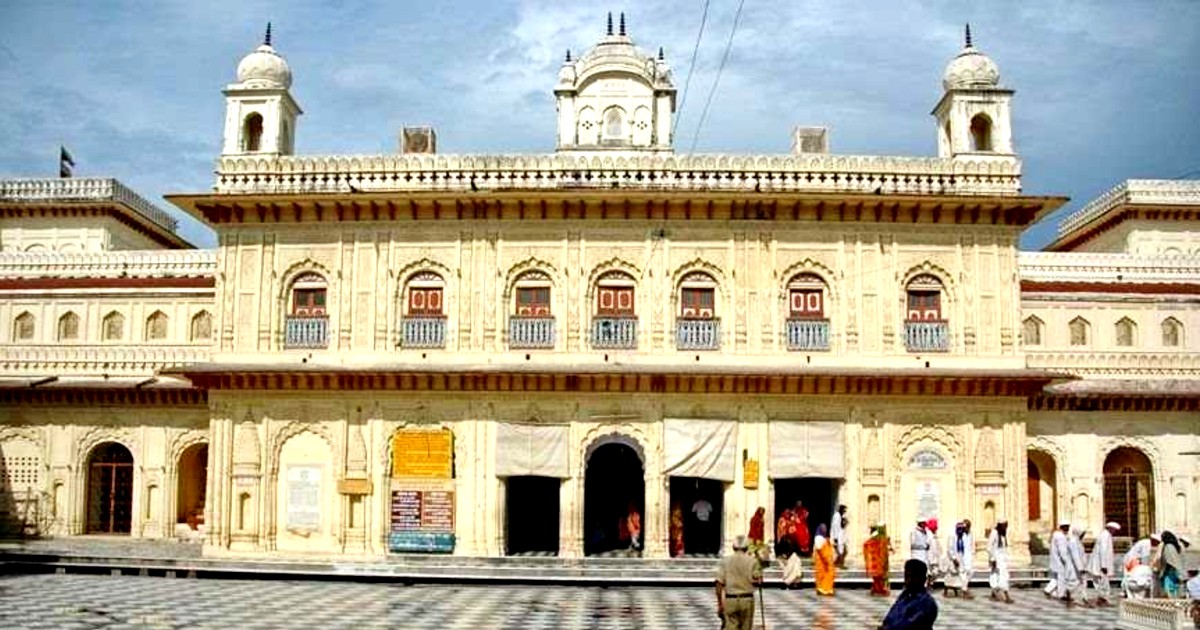 The city of Ayodhya in Uttar Pradesh holds a special place in the hearts of millions of people practising Hindusim. It is the birthplace of Lord Rama and the setting for the epic, Ramayana. Ayodhya is one of the most sacred places in the country, situated on the banks of Saryu. The biggest festival of the country, Diwali can also be traced back to Ayodhya. The entire city was illuminated with clay lamps to welcome the victorious Lord Rama who returned back home after slaying the demon Ravana. On August 5, the groundbreaking Bhoomi Pujan ceremony took place for to lay the foundation stone for the majestic Ram Temple in Ayodhya. Prime Minister Narendra Modi laid the 40kg silver foundation stone. Now that we have piqued your interest, here are 10 places you must visit when you travel to the temple city of Ayodhya.

Since Ayodhya is the birthplace of Lord Rama, a massive Ram Mandir or Ram Temple shall be built here. On August 5, the Bhoomi Pujan ceremony took place to lay the foundation stone to build the temple. In fact, Prime Minister Narendra Modi laid the 40-kg silver foundation during this ritual. Soil from more than 2000 pilgrimage sites and holy water from more than 100 sacred rivers were brought for this ritual. Around 195 eminent personalities attended this Bhoomi Pujan. The construction of the Ram Mandir shall take around 3 years. The Ram Mandir shall be around 161 feet in height and will have 5 domes. This is definitely a place you must visit as it holds a lot of spiritual and cultural heritage.

Since Ayodhya is the birthplace of Lord Ram, it remains crowded with tourists and pilgrims throughout the year. Ram Katha Park eases the tourism pressure upon holy places. This is a gorgeous park that offers tourists a much-needed solace from the crowded spaces of the town. The park has open-air theatres and venues to host cultural and religious functions. When you take a stroll here the melodious recitals, public discourses and religious activities shall leave you feeling refreshed. Ram Katha Park is a popular leisure destination for people of all age groups who wish to spend their evenings and weekends in a spiritually charged environment. 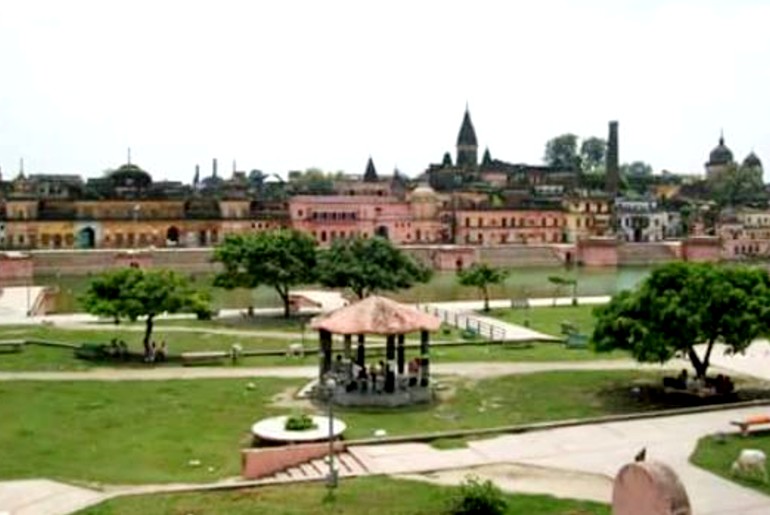 Situated in Sai Nagar, Hanuman Garhi is a temple dedicated to the Hindu God, Hanuman. This temple is built in a fortified design since Hanuman is believed to be the protector of Ayodhya. Thousands of devotees flock here to celebrate the birth of Lord Rama during Ram Navami and the birth of Lord Hanuman, Hanuman Garhi. Built during the 10th century, this hilltop temple houses a 76- staircase pathway to the entrance. When you visit here you will be taken aback by the gorgeous panoramic view of the surrounding hills. The main temple also cites an interior cave adorned with numerous statues of Lord Hanuman and his mother, Maa Anjani. 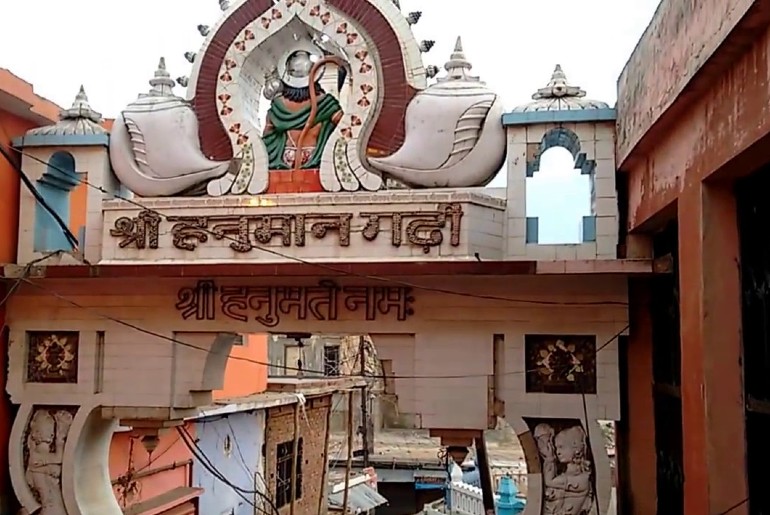 Also Read: New Railway Station At Ayodhya To Be A Look-Alike Of Ram Mandir

Ayodhya houses the Dasrath Bhavan, nestled bang in the centre of the city. King Dasrath was the father of Lord Ram. And this temple is constructed at the very same place where the original palace of King Dasrath existed. Dasrath Bhavan houses a shrine with idols of Lord Ram, Lakshman and Sita. When you’re here you can witness sadhus and saints clad in orange coloured clothes who recite dohas and chuapais from the Ramayana and other scriptures. The religious fervour here will leave you feeling basking in serenity. 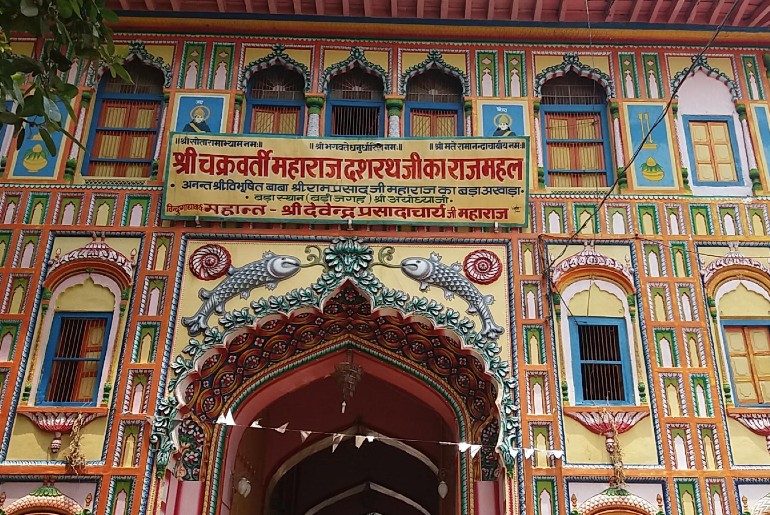 Treta Ke Thakur Temple houses numerous idols including that of Lord Ram, Sita, Lakshman, Hanuman, Bharat and Sugreev. All these statues are believed to be sculpted out of a single black sandstone. Treta Ke Thakur is a 300-year old temple. This structure apparently stands on the very same ground of the famous Ashwamedha Yagna performed by Lord Rama. The temple underwent renovation in the 1700s by the Maratha queen, Ahilyabai Holkar. Bangalore also has exquisite temples that you must visit. 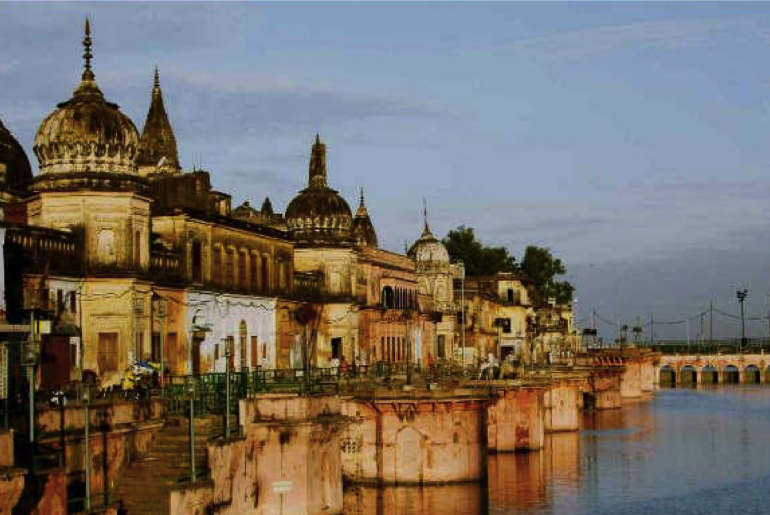 Nageshwarnath Temple is situated adjacent to the Theri Bazaar in Ayodhya. It’s established in the name of Lord Nageshwarnath, the local deity. Lord Rama’s son, Kush set up this temple. Even though this sacred site continues to be well maintained since 750 AD, the current teple was reconstructed in 1750 by Safar Jung’s minister, Naval Rai. Legend says, Kush came across a Shiva devotee, Naga Kanya when he lost his arm ring. When she fell in love with him, he raised a Shiva temple for her. The Nageshwarnath Temple attracts devotees from all across the country during Mahashivaratri. The Shiva Bharat procession of Lord Shiva is a major attraction here. 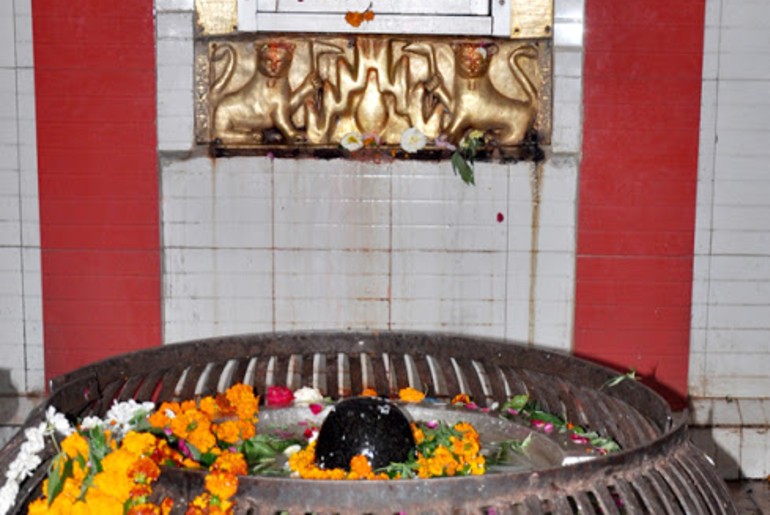 Kanak Bhawan means ‘Golden Palace’. It houses three golden-crowned idols of Lord Rama and his wife, Goddess Sita under the silver roof in the sanctum santorum (Garbagriha). It’s believed that this shrine was gifted to the couple by Lord Rama’s stepmother Kaikeyi. Constructed in 1891, this temple is known as Sone-ka-Ghar. Upon renovation during Vikramaditya’s reign, the present site was fully revamped by Vrish Bhanu Kunwari. This Bundela-style temple is one of the most beautiful places you must visit in Ayodhya. 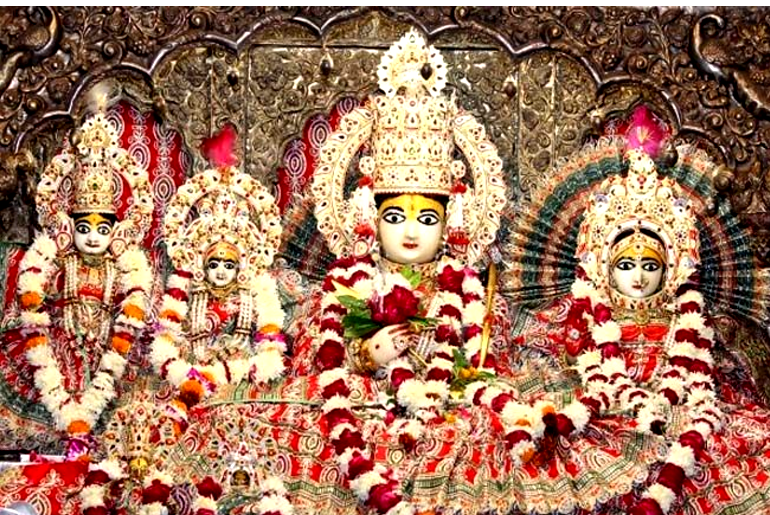 Sita Ki Rasoi is actually a temple instead of royal kitchen. It’s located in the north-western side of the Ram Janamasthan. The temple houses idols of the princes of the royal household and their wives- Ram, Lakshman, Bharat, Shatrughan along with their wives Sita, Urmila, Mandvi and Shrutikriti. The kitchen has symbolic kitchenware like a rolling pin and rolling plate. Maa Sita didn’t just cook for her family. In fact, she fed the entire race of mankind, similar to Goddess Annapurna. So this makes it all the mere a special place to visit in Ayodhya. 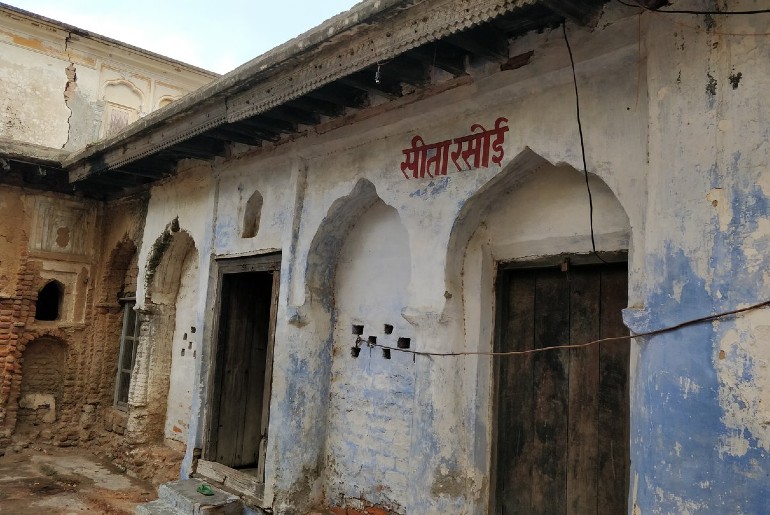 People set up Tulsi Udyan, a garden a memorial to the great saint and poet Tulsi Das. He was the creator of the Epic, Ramcharit Manas. When you visit here, you can witness the beautifully carves a statue of Tulsi Das in the garden. The garden is located near the Ayodhya Bus Stand on the National Highway passing through Faizabad. The park to its present name Tulsi Udyan in 1960. Currently, its managed by the Udyan Vibhag, Government of Uttar Pradesh. 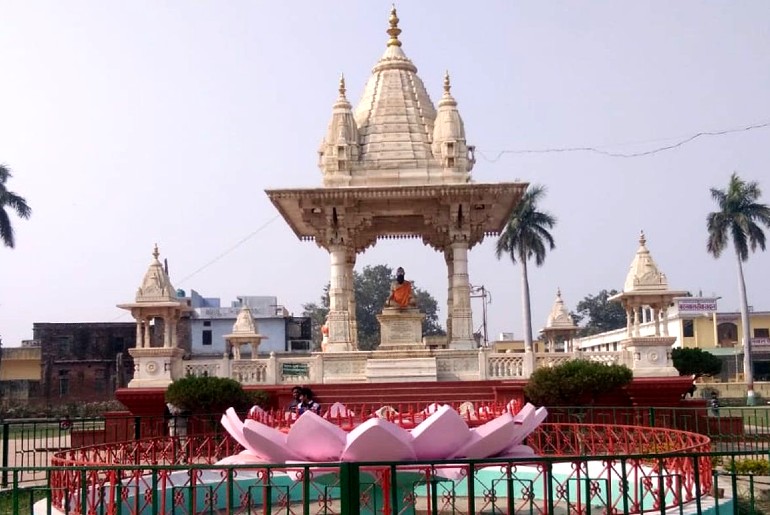 Also Read: Did You Know That World’s Highest Shiva Temple Is Located In Uttarakhand?

Ramayana mentions that Lord Hanuman uprooted an entire mountain containing the rejuvenating Sanjeevani Booti to treat Lakshmana after he was wounded in the battle by Meghnad. Legend states that a part of the mountain fell at a place in Ayodhya. This hillock is called Mani Parbat, situated close to the Sugriv Parbat. The top of Mani Parbat is 65 feet in height. And it’s home to many shrines. When you stand right at the top of the Mani Parbat, you can get a breathtaking view of the city of Ayodhya. Lord Rama stayed in Ayodhya for six years and gave his sermons on the Law of Dharma from the Mani Parbat. The Parbat also contains a stupa built by Emperor Ashoka. And this is what makes Mani Parbat so special amongst both Hindu and Buddhist devotees. 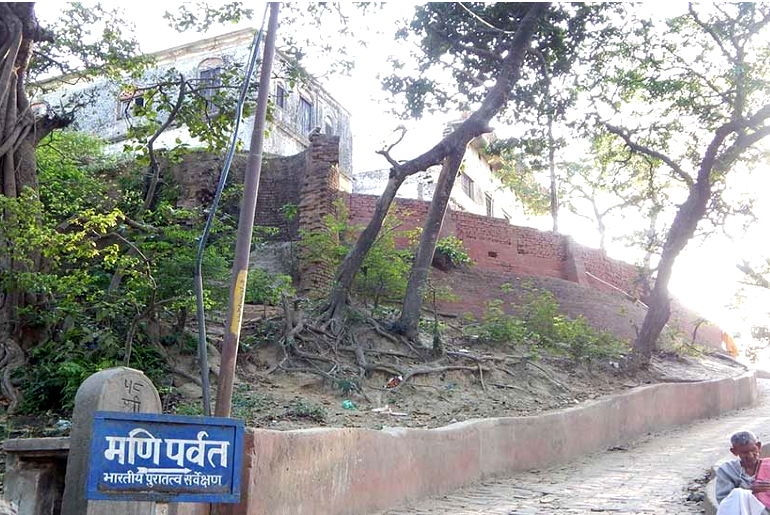 So these are some of the most divine places that you must visit when you travel to Ayodhya. The city of Ayodhya holds centuries-old history, culture and spirituality. And you must see it to believe it. Meanwhile, check out this video of Jodhpur’s unique Bullet Baba Temple.