US Woman Calls 911 On Finding Dead Body At Beach; Finds Out It’s A Mannequin Lifelike statues can sometimes cause confusion and hilarious situations. In England, residents of the countryside called cops after they saw a tiger sitting by the park. When the cops and helicopters arrived, this tiger ended up being just a sculpture. On a similar note, a Florida woman called 911, emergency services on spotting a dead body by the beach. Funnily enough, the ‘dead body’ ended up being a mannequin covered in seaweed and barnacles. Read on to know more.

A Florida woman spotted a mysterious body at by the beach at Perdido Key, Escambia County in the USA. She was utterly disturbed by the body lying on the sand. So, she immediately called 911. But on closer examination, she realised it was a mannequin covered in seaweeds and barnacles. Ocean’s Hour, a Facebook group shared the photos of this mysterious body on Facebook. It revealed how a volunteer of their organisation, Kathleen came across this ‘dead body’ by the beach. 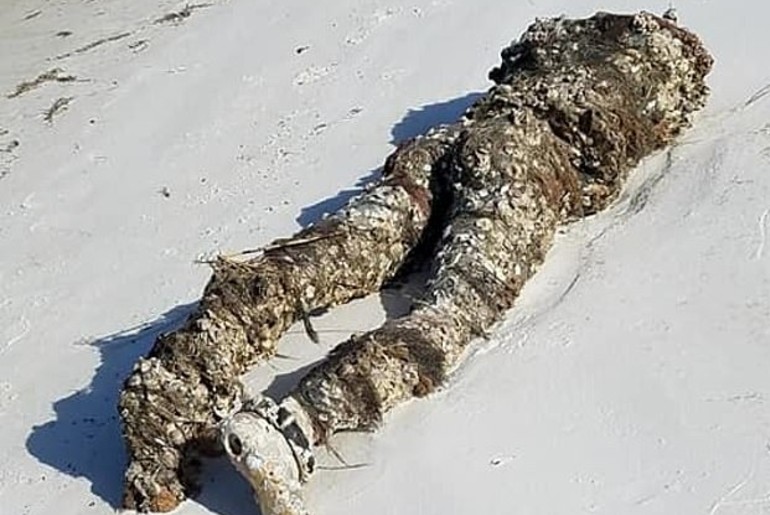 Dead Body Turns Out To Be A Seaweed Covered Mannequin

It added, “Another visitor had even called 911. Upon further investigating, she realized it was a mannequin! How long has she been out in the water collecting barnacles and sea life? Way too long! We are glad it wasn’t a real body!” The mannequin oddly looked like a dead body, due to its human shape. The sea damage resulted in the mannequin being fully covered by barnacles and seaweed, From far,the plastic isn’t clearly visible. The seaweed and barnacles made it look like a rotting corpse. So it really isn’t a surprise that the woman got a shock and called 911. If you want to see a fair share of statues, visit Mumbai’s Wax Museum.